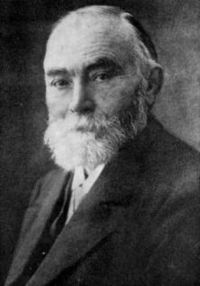 Friedrich Frege was a German mathematician, logician, and philosopher who began his career specializing in the geometric representation of imaginary forms on a flat plane. However, it was not long before his thoughts began to turn increasingly toward logic and its relationship to mathematics.

Inspired by the earlier work of Leibniz, Frege virtually founded the modern discipline of mathematical logic. In Die Grundlagen der Arithmetik (1884), he used set theory to define the cardinal number of a given class as the class of all classes that are similar (i.e. can be placed in a one-to-one correspondence) to the given class.

In Grundgesetze der Arithmetik (2 vols., 1893 and 1903), Frege began attempting to build up mathematics from arithmetic and symbolic logic on a rigorous and contradiction-free basis. When the second volume was in the process of being printed, Bertrand Russell pointed out a paradox in Frege's work. The paradox, which became known as Russell's paradox, stems from the question: "Is the class of all classes that are not members of itself a member of itself or not?" The question leads to a contradiction and cannot be resolved. Frege was thus forced to admit that the foundation of his reasoning was worthless. As he stated at the end of his work, "A scientist can hardly encounter anything more undesirable than to have the foundation collapse just as the work is finished. I was put in this position by a letter from Mr. Bertrand Russell when the work was almost through the press."

Frege felt that mathematics and logic were fundamentally entwined, and that logic, in the end, reduces to pure logic. As a result of his efforts, he virtually invented, in 1878, the concept of predicate logic; it was the single biggest leap forward in the philosophy and approach to logic since Aristotle.

Predicate logic is the idea that new information can be gleaned from two or more preceding pieces of information. In its simplest form predicate logic can be seen in the following three sentences:

The argument is purely logical because the structure, the choice of wording, of the first two statements (called the "logical structure") is designed to convince the listener to accept a proposition.

Frege did not use the phrase "predicate logic" (it was introduced much later) to describe what he was struggling toward: a new system of logical notation, a "language" for the expression of logical theory. It was a language with its won syntax and semantics, which he applied, in turn, to constructing a new platform of principles so exacting that they could be used for propositions never before considered by logicians. Frege recorded his new approach in his landmark book, Begriffsschrift (Concept Notation, 1879), little read before 1950, partly because of its author's eccentric and extensive notations. Nevertheless, the use of symbols and formulas in logic today is due in no small part to Frege's pioneering work.