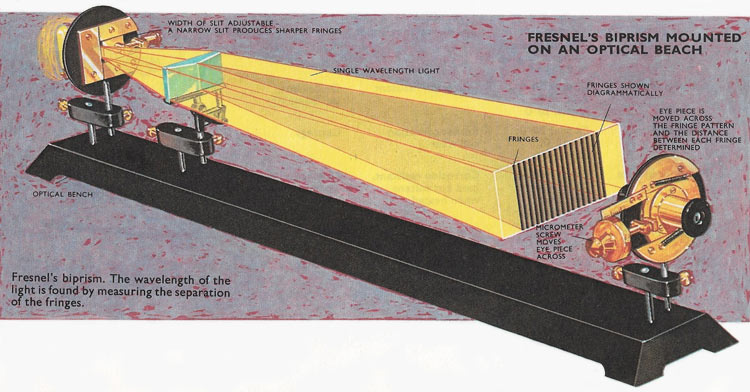 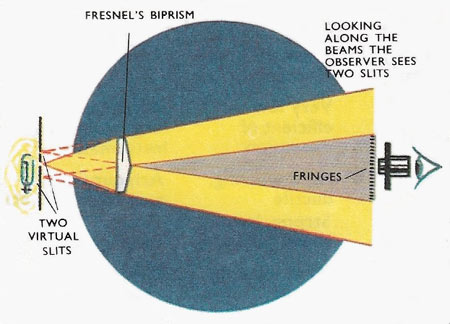 Fig 2. Path of the light rays in Fresnel's biprism. A person looking back through the prism, will see two imaginary slits. 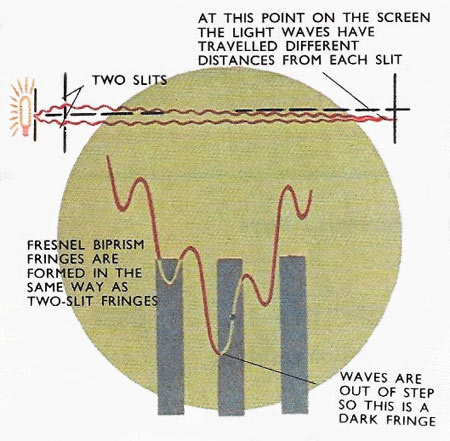 Fig 3. Two-slit pattern. Interference fringes are due to the adding or cancellation of light waves.

Augustin Fresnel was a French physicist and engineer who developed the transverse-wave theory of light through his work on optical interference. He worked also on reflection, refraction, diffraction, and polarization, and developed a compound lens system still used in many lighthouses.

One of the characteristics of all waves is that they can be made to interfere (i.e. two crests will add together and a crest and a trough will cancel out). Single wavelength light waves such as yellow light waves from a single slit and fall on a screen. If the light waves from each slit are in step (crest to crest), a bright region appears at that point. If they are out of step (crest to trough) a region of darkness results.

At the center of the screen the light waves have both travelled exactly the same distance from each slit, so they are in step. If the yellow light is of wavelength 5000 Å (1Å = 10-8cm.) then on moving out on the screen from the center a point is reached where the difference in the distances to each slit differs by 2500 Å. At this point crest meets trough and there is a dark fringe. Going out further, the difference to the slits = 5000 Å and light from the two slits adds together to give a bright fringe. This is how an interference pattern is formed. Obviously the distance between the fringes depends on the wavelength of the light.

Fresnel explored interference effects mathematically some years after Thomas Young had demonstrated the wave nature of light. He devised a special type of twin prism called a biprism for producing interference effects from a single slit instead of two. This prism causes the light to appear to come from a double slit and produces a similar pattern to a double slit. One side of the biprism is flat and the other side is cut as two planes whose faces are not quite at 180 to each other. The light passing through the flat side meets the inclined planes. These refract the two halves so that they fall on one another and interfere. If the line of the refracted beams is produced back, a person looking along these beams through the prism will 'see' two slits.

The fringes produced by these two virtual slits are very sharp and either can be viewed on a screen or through an eyepiece. To measure the wavelength of the light the eyepiece is provided with a micrometer screw so that it can be moved across the fringes and their distance apart determined. In an experiment with this prism, the wavelength of the light used is determined by measuring the width of a block of 20 fringes, and calculating from this, the average width of one fringe.