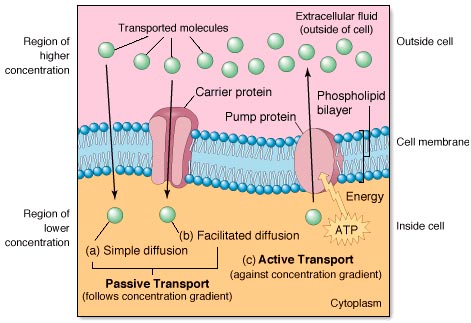 Facilitated diffusion is one of the means by which substances are passively transported across biological membranes; it involves the transport of ions as well as other solutes such as sugars and amino acids.

Facilitated diffusion involves proteins known as carriers, which, as in the case of ion channels, are specific for a certain type of solute and can transport substances in either direction across the membrane. However, unlike channels, they facilitate the movements of solutes across the membrane by physically binding to them on one side of the membrane and releasing them on the other side. The direction of the solute's net movement simply depends on its concentration gradient across the membrane. If the concentration is greater in the cytoplasm, the solute is more likely to bind to the carrier on the cytoplasmic side of the membrane and be released on the extracellular side, and there will be a net movement from inside to outside. If the concentration is greater in the extracellular fluid, the net movement will be from outside to inside. Thus, the net movement always occurs from high concentration to low, just as it does in simple diffusion, but the process is facilitated by the carriers. (Compare with active transport in which energy is expended to move substances against a concentration gradient.)

One example of a carrier is found in the membranes of vertebrate erythrocytes (red blood cells); it transports Cl- ions in one direction and bicarbonate ions (HCO3-) in the opposite direction. This carrier is important in the transport of carbon dioxide by the blood.

A characteristic feature of carrier-mediated transport is that its rate is saturable. That is, if the concentration gradient of a substance is progressively increased, the rate of transport of the substance will increase up to a certain point and then level off. Further increases in the gradient will produce no additional increase in rate. The reason for this is that there is a limited number of carriers in the membrane. When the concentration of the transported substance is raised high enough, all of the carriers will be in use and the capacity of the transport system will be saturated. In contrast, substances that move across the membrane by simple diffusion (that is, diffusion through the lipid bilayer without the assistance of carriers) do not show saturation.

Facilitated diffusion provides the cell with a ready means of preventing the buildup of unwanted molecules within the cell or of taking up from the external medium molecules that may be present there in high concentration. It has three essential characteristics: