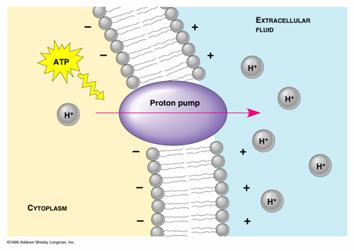 Active transport is the pumping of individual ions or molecules across a cell membrane, through the use of a protein, from a region of lower concentration to one of higher concentration. Because the ion or molecule is moved in a direction other than the one in which simple diffusion would take it, this transport requires energy, which is typically supplied by the expenditure of ATP (adenosine triphosphate).

Active transport is used to:

There are two main types of active transport: primary and secondary. Primary active transport uses energy directly to convey molecules across a membrane. Most of the enzymes that perform this type of transport are transmembrane ATPases. A primary ATPase universal to all cellular life is the sodium-potassium pump, which helps maintain the cell's resting potential. In primary transport, energy is directly coupled to the movement of a desired substance across a membrane independent of any other species. In secondary active transport, there is no direct coupling of ATP; instead, the electrochemical potential difference created by pumping ions out of cells is used.

Active transport is inhibited by substances that interfere with cellular metabolism (e.g., high doses of digitalis).