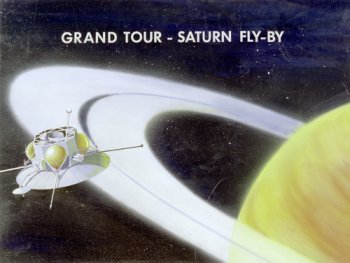 The Grand Tour was a proposal, first put forward in the late 1960s, for a single spacecraft to fly by all four major outer planets – Jupiter, Saturn, Uranus, and Neptune – by taking advantage of a once-in-179-year alignment of these worlds and the multiple gravity-assists this celestial configuration allowed. The Grand Tour, as originally planned, was a budget casualty of 1970. However, shortly after the cancellation, JPL proposed a more modest mission, tentatively called Mariner Jupiter/Saturn. The two-spacecraft project thus developed was eventually approved and renamed Voyager (see Voyager 1 and Voyager 2).