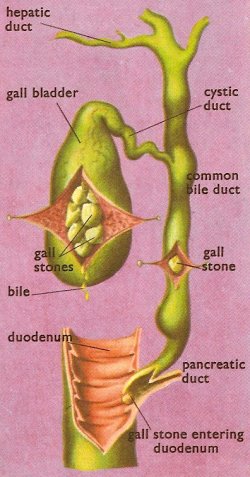 The biliary system showing sites at which gallstones may become impacted.

A gallstone, also called a cholelithiasis, is a small, pebble-like body that forms in the gall bladder. Gallstones may be round or oval, smooth or faceted. They range in size from tiny fragments no bigger than grains of sand to stones the size of hazel nuts. They are usually formed of a mixture of cholesterol, bilirubin, and calcium carbonate, though "pure" stones consisting of only one of these materials are not unknown.

Many gallstones are "silent" and cause no discomfort. Should a stone, however, find its way into the cystic or common bile ducts, an attack of very severe pain follows as the muscle of the gall bladder and ducts try to push it into the duodenum. When the stone reaches the duodenum the pain subsides.

A gallstone that sticks in the common bile duct obstructs the flow of bile into the duodenum. The bile is dammed back toward the liver and thus begins to accumulate in the blood. As the concentration in the blood increases jaundice appears, and remains until either the stone moves on spontaneously, is dissolved by drug treatment, or is removed by a surgeon.

If any of the bile ducts remain blocked for a significant period of time, severe damage or infection can occur in the gallbladder, liver, or pancreas. Left untreated, the condition can be fatal.

Gallstones develop when an imbalance occurs in the chemical composition of bile. This most commonly occurs when the liver puts too much cholesterol into the bile or fails to put in enough of the substances that normally keep cholesterol in solution. Excess cholesterol in the bile may lead to the formation of solid cholesterol fragments, which may build up to form stones.

Gallstones are rare in childhood and become progressively more common with age. Women are two to three times more likely to be affected than men. Groups at risk include overweight and obese people and women who have had many children.

As gallstones move into the bile ducts and create blockage, pressure increases in the gall bladder and one or more symptoms may occur. Symptoms of blocked bile ducts are often called a gallbladder "attack" because they occur suddenly. Gallbladder attacks often follow fatty meals, and they may occur during the night. A typical attack can cause

Notify your doctor if you think you have experienced a gall bladder attack. Although these attacks often pass as gallstones move, your gallbladder can become infected and rupture if a blockage remains.

People with any of the following symptoms should see a doctor immediately:

Many people with gallstones have no symptoms; these gallstones are called "silent stones." They do not interfere with gallbladder, liver, or pancreas function and do not need treatment.


Because gallstone symptoms may be similar to those of a heart attack, appendicitis, ulcers, irritable bowel syndrome, hiatal hernia, pancreatitis, and hepatitis, an accurate diagnosis is important.

If you have gallstones without symptoms, you do not require treatment. If you are having frequent gall bladder attacks, your doctor will likely recommend you have your gall bladder removed – an operation called a cholecystectomy. Surgery to remove the gall bladder – a nonessential organ – is one of the commonest surgeries.

Nearly all cholecystectomies are performed with laparoscopy. After giving you medication to sedate you, the surgeon makes several tiny incisions in the abdomen and inserts a laparoscope and a miniature video camera. The camera sends a magnified image from inside the body to a video monitor, giving the surgeon a close-up view of the organs and tissues. While watching the monitor, the surgeon uses the instruments to carefully separate the gall bladder from the liver, bile ducts, and other structures. Then the surgeon cuts the cystic duct and removes the gall bladder through one of the small incisions.

Recovery after laparoscopic surgery usually involves only one night in the hospital, and normal activity can be resumed after a few days at home. Because the abdominal muscles are not cut during laparoscopic surgery, patients have less pain and fewer complications than after "open" surgery, which requires a 5- to 8-inch incision across the abdomen.

The most common complication in gall bladder surgery is injury to the bile ducts. An injured common bile duct can leak bile and cause a painful and potentially dangerous infection. Mild injuries can sometimes be treated nonsurgically. Major injury, however, is more serious and requires additional surgery.

If gallstones are present in the bile ducts, the physician – usually a gastroenterologist – may use ERCP to locate and remove them before or during gall bladder surgery. Occasionally, a person who has had a cholecystectomy is diagnosed with a gallstone in the bile ducts weeks, months, or even years after the surgery. The ERCP procedure is usually successful in removing the stone in these cases.