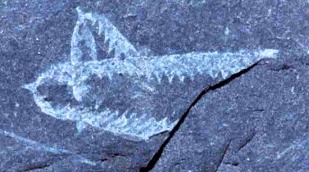 A graptolite is a member of an extinct group of colonial, marine organisms, with a stick- or plant-like appearance, specimens of which occur in black shales of Carboniferous to Cambrian age, 280–570 million years old. Some zoologists believe that graptolites are ancestors of the chordates. The name "graptolite" means "to write on stone," because of their resemblance to written marks.

Graptolites were colonial animals; numerous individuals lived in cup-like structures called thecae attached to a common thread or stipe. The skeleton itself was made up of two layers of chitin. In the earliest graptolites – the Dendroidea – there were two different types of cup and a thin chitinous thread called the stolon ran throughout the colony. The stolon was possibly a similar structure to the notochord which would relate the graptolites to the chordates. Their colonies were at first large, and branched extensively, but later they tended to become simpler.

The other important group, the Graptoloidea, were without chitinous stolons but are thought to have evolved from Dendroid forms. Further, only one type of cup was present, though the shape of this varied enormously within the group. Branching was not so extensive as in the Dendroidea; many forms in fact did not branch at all.

The graptolites made very rapid changes in shape and form as they evolved and are subsequently good fossils for dating the rocks. For instance, sediments formed at one point in time will contain a type of graptolite distinct from those found in sediments deposited shortly afterwards. Moreover, most graptolites drifted in open waters. Thus their remains are scattered over a wide area and enable one outcrop of rock to be directly related in age to another, hundreds of kilometers away. Unfortunately for the fossil record the race became extinct toward the end of the Silurian period.