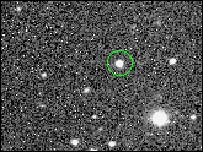 69230 Hermes is an asteroid, discovered by the German astronomer Karl Reinmuth (1892–1979) on October 28, 1937, that passed about 780,000 km from Earth. Reinmuth tracked it for 5 days but its orbit was never established well enough for it to be located again, and the object was long considered to be lost. However, after 66 years, on October 15, 2003, Brian Skiff of the Lowell Observatory found a mystery object that proved to be Reinmuth's object. Timothy Spahr at the Minor Planet Center in Cambridge, Massachusetts, identified similarities with the 1937 observations, and Steven Chesley and Paul Chodas at NASA's Jet Propulsion Laboratory (JPL) linked the observations to Hermes.

Subsequent radar observations carried out using the Arecibo radio telescope showed that Hermes is actually a binary asteroid. While several other asteroids have satellites, the other known binaries with trajectories that cross the orbit of the Earth consist of a large primary asteroid orbited by a much smaller one. Hermes is the first asteroid ever discovered in the near-Earth population where the two components are essentially equal in size. This makes it puzzling: it may have been split when it swung so close to a planet that it was ripped apart by gravitational forces, but we don't know for sure.