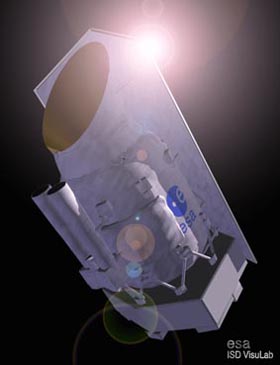 The Herschel Space Observatory is a giant European Space Agency space telescope with a 3.5-m-diameter main mirror (by comparison, the Hubble Space Telescope's is only 2.4 m across) designed to observe the universe in unprecedented detail at far infrared and submillimeter wavelengths, from 55 to 672 microns, and to carry out sensitive photometry and spectroscopy. It will be used especially to study how stars and galaxies form and evolve.

Herschel was launched together with Planck on May 14, 2009, by an Ariane 5 rocket. The two spacecraft will operate from different orbits around the second Lagrangian point (L2), some 1.5 million km from Earth. The observatory is named after William Herschel.