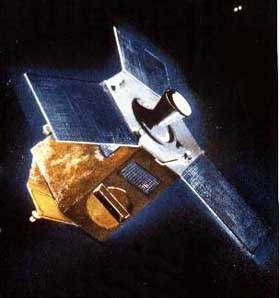 Hipparcos was a European Space Agency satellite, launched in 1989 and designed to carry out astrometric surveys to an unprecedented degree of accuracy. Its name is an acronym for High Precision Parallax Collecting Satellite and was chosen for its (somewhat strained) similarity to that of the Greek astronomer Hipparchus.

Although, due to a faulty launch, Hipparcos ended up in a highly elliptical orbit instead of the intended geosynchronous one, its mission was eventually a triumph and resulted in two catalogues: the Hipparcos catalogue of 118,000 stars with positions, parallaxes, and proper motions measured to an unprecedented accuracy of 2 milliarcsec and the Tycho catalogue of over a million stars with measurements of somewhat lower accuracy. It has been indirectly useful to those involved in the investigation of exoplanets, since it has enabled the distance (and therefore the true brightness) of the host stars of newly discovered planets to be known to greater accuracy. However, a second generation astrometric mission, such as the Global Astrometric Interferometer for Astrophysics (GAIA), will be needed to make a serious contribution to our knowledge of the occurrence and distribution of planetary systems by this means.