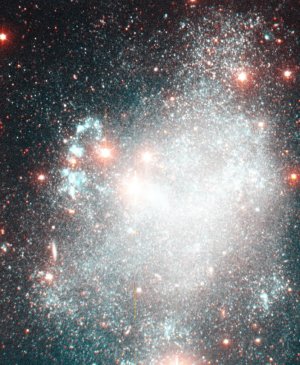 The Holmberg II Dwarf Irregular Galaxy is a much-studied, relatively nearby galaxy in which a great deal of star formation is taking place; it lies 9.8 million light-years away in the M81 Group. Holmberg II enables astronomers to study star birth in an environment that isn't disturbed by density waves (as happens in larger galaxies such as the Milky Way) or by deformation caused by the pull of another galaxy, and that is conveniently close. Giant holes in the little galaxy – the largest about 5,500 light-years wide – are regions of old star formation. Waves of energy from mature and dying stars have blown out the surrounding gas and dust, resulting in these great voids, which have held their shape because there are no spiral arms or a massive nucleus to distort them. New star birth is also taking place, but not in the same areas as the holes because these are drained now of gas or dust. The star formation regions in Holmberg II appear as disorganized patches that occupy a relatively large fraction of the disk. They are massive, filled with hundreds of young, blue, O stars because the size and luminosity of star-forming regions increases only slowly with the size of the parent galaxy. One region in particular has almost as many young stars as the famous Tarantula Nebula of the Large Magellanic Cloud.

A star formation model known as the "champagne" model has been used to describe the way new stars trigger even newer star birth in Holmberg II. In this scheme the bubble created by the stellar winds of a new star expands until it reaches the perimeter of the molecular cloud from which the star was born. At this point the gas and dust has been compressed against the outside wall of the molecular cloud. The result is a blistering effect on the wall: these blisters are actually new stars forming on the outside wall of the molecular cloud, resembling champagne bubbles popping out of the parent molecular cloud. The champagne model leads to star formation regions that seem to be connected in chains. As new stars form, they are constantly triggering even newer star birth, which creates a type of domino effect that spreads throughout the galaxy.