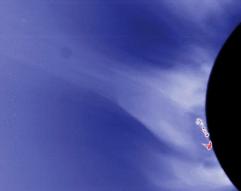 A helmet streamer is a beautiful structure, seen during a solar eclipse, in which million-degree plasma in the Sun's corona is trapped by closed magnetic field lines. Prominences are often situated beneath helmet streamers, and active regions occur beneath streamers near the equator (sometimes called active region streamers). In some regions, the coronal magnetic field cannot confine the plasma, and the plasma expands outward, reaching supersonic velocities. Regions on the Sun with these open magnetic field lines (which stretch far out into the Solar System) correspond to coronal holes and are the source of the solar wind. The electrons in the coronal hole plasma are typically cooler and less dense than streamers, and so they show up as dark regions in both X-rays and white light.