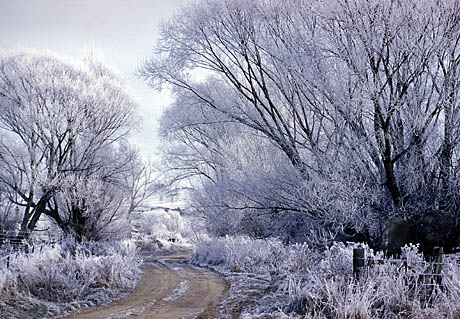 Ice is frozen water (i.e., water when in its solid state at or below 0°C): a colorless crystalline solid in which the strong, directional hydrogen bonding produces a structure with much space between the molecules. Thus ice is less dense than water, and floats on it. The expansion of water on freezing may crack pipes and automobile radiators. Since dissolved substances lower the freezing point, antifreeze is used. For the same reason, seawater freezes at about -2°C. Ice has a very low coefficient of friction.

When water vapor condenses below freezing point, ice crystals are formed. This occurs mainly in high cirrus clouds, but also in the gray portion of other clouds. Clusters of these ice crystals form snowflakes. It also occurs close to the ground as frost.

Under various conditions ice can have viscosities and flow properties similar to those different types of molten rock, and therefore can result in the formation of similar geologic structures. Ice that is at near freezing temperatures (273 K) and low pressure (less than 1,000 bars) – Ice I – has different physical properties than ice at lower temperatures and higher pressures. (E.g. Ice II is stable at 200 K and 6,000 bars, while Ice VI is stable at 200 K and 15,000 bars.) These phases of ice have different densities and flow properties that may be expressed through tectonic and volcanic processes on icy satellites. When these ices contain small amounts of impurities, such as ammonia, they are known as clathrates, and have a lower melting temperature than pure water-ice. This may be a factor in volcanic processes on certain large outer satellites.

The term 'ice' is used in a more general sense by planetary scientists to refer to a variety of volatile substances, including water, methane, and ammonia, when in their solid state. Water-ice is an important geological material on many of the outer planet satellites.

Regelation is the refreezing of ice that has melted under pressure alone, once the pressure is released. Ice skating depends on regelation, but as ice melts readily under pressure only while its temperature is near its freezing point, skating may not be feasible in very cold weather.

Frost is frozen atmospheric moisture formed on objects when the temperature is below 0°C, the freezing point. Hoarfrost forms in roughly the same way as dew but, owing to the low temperature, the water vapor sublimes (see sublimation) from gaseous to solid state to form ice crystals on the surface. The delicate patterns often seen on windows is hoarfrost. Glazed frost usually forms when rain falls on an object below freezing: it can be seen, for example, on telegraph wires. Rime occurs when supercooled when water droplets contact a surface that is also below 0°C; it may result from fog or drizzle. The first frost of the season signifies the end of the growing season.