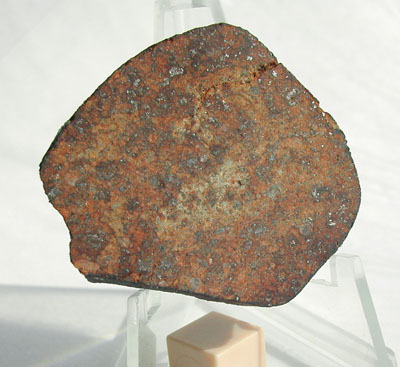 A complete slice of a fragment of the L'Aigle meteorite (approx 10 g). It has the classic features of the L6 chondrite L'Aigle including a brown texture with gray highlights along with small, less distinct chondrules and a little metal. The cube visible underneath is a cubic centimeter and is included for scale. This specimen is part of the Dr. Martin G. Horejsi meteorite collection – one of the largest private collections of historic meteorites that were witnessed to fall. Credit: Martin Horejsi. 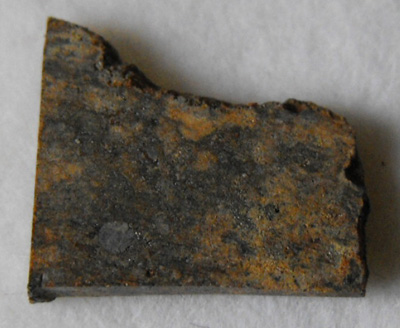 A partial slice of a fragment of the L'Aigle meteorite (0.574 g). Credit: Wandering Star Meteorites. 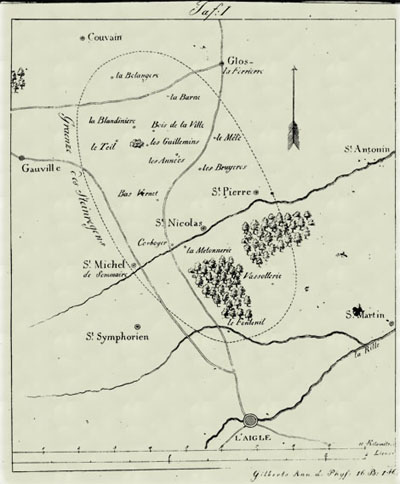 The L'Aigle meteorite shower was a meteorite shower of more than 3,000 fragments of an L6 chondrite (the commonest type of meteorite) which rained down just north of the town of L'Aigle in Normandy, France, 70 km west of Paris, at about 1 pm on Apr 26, 1803. A total of more than 37 kg of material was collected from the fall. It proved to be a turning point in the understanding of meteorites and their origins.

Until this time, the idea that rocks came from space seemed fantastic, and even witnessed meteorite falls were treated with skepticism. But, upon hearing of the extraordinary events at L'Aigle, the French Academy of Sciences sent Jean-Baptise Biot to investigate. His meticulous fieldwork and subsequent paper describing how these stones must undoubtedly be of extraterrestrial origin effectively gave birth to the science of meteoritics.

L'Aigle was also the first meteorite shower where the recovered pieces were mapped. Today, this technique is known as strewn field mapping (see bottom illustration).