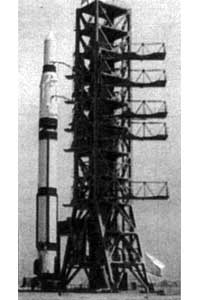 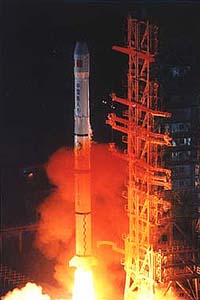 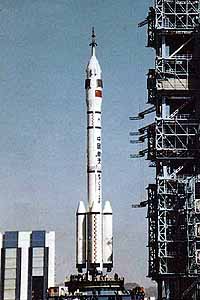 Long March (Chang Zeng, CZ) is a series of Chinese launch vehicles, the most recent of which support China's current unmanned and nascent manned space programs. Long March rockets are descendants of ballistic missiles developed by China in the 1960s following the breakdown of Sino-Soviet relations in June 1959. They fall into three generations.

China's first orbital launch vehicle, derived from the DF-3 (Dong Fang = 'east wind') missile which was designed by Tsien Hsue-shen but never built. A 29.5-m-long three-stage rocket, the first two stages of which used liquid propellant and the third solid propellant, the CZ-1 launched the first two Chinese satellites in 1970–71 after a failure in November 1969.

Little is known of this launch vehicle except that, like the CZ-2, it was developed from the two-stage, liquid-propellant DF-5 intercontinental ballistic missile (ICBM); FB stands for Feng Bao, meaning 'storm.' It made four orbital flights between 1975 and 1981.

Believed to be very similar to FB-1; it was launched only once, in November 1974.

The B designation was reserved for FB-1.

A successful low-Earth-orbit rocket with a payload of about 2,800 kg, derived from the DF-5 ICBM, which formed the basis for future Long March launch vehicles. On October 6, 1992, on its 13th flight, the CZ-2C successfully launched the Swedish Freja satellite as a copassenger. On April 28, 1993, the Chinese Great Wall Industrial Corporation and Motorola signed a contract for multiple launch of Iridium satellites using the CZ-2C/SD, a 2C variant with a newly developed Smart Dispenser and improved second stage tanks and engines. The first deployment launches for the Iridium program (each carrying two satellites) went ahead successfully in 1997–98.

A three-stage launch vehicle designed to place satellites into geostationary transfer orbit (GTO) or sun-synchronous orbit. The majority of the technology and flight hardware used in the CZ-3, including the first and second stages, was proven by the CZ-2C. The new third stage was equipped with a liquid oxygen/liquid hydrogen cryogenic engine. The CZ-3's GTO payload was about 1,500 kg.

Similar to the CZ-3 but with a more powerful third stage, raising GTO payload capacity to about 2,700 kg, and more capable attitude control system. By June 1998, the CZ-3A had made three consecutive successful launches and was offered to international customers.

The most powerful Long March launch vehicle with a payload capacity of about 5,000 kg. It was based on the CZ-3A but had enlarged propellant tanks, larger fairing, and four boosters strapped onto the core stage.

A launch vehicle that combined the CZ-3B core with two boosters from the CZ-2E. The standard CZ-3C fairing is 9.56 m long and 4.0 m in diameter.

A three-stage vehicle that uses storable propellants and is intended for launching satellites into polar or sun-synchronous orbits. It differs from the CZ-3 mainly in its third stage which features thin-wall tankage and two gimbaled engines. On September 7, 1988, the CZ-4A made its inaugural flight, successfully launching China's first experimental meteorological satellite. The CZ-4B, introduced in 1999, is an improved model with enhanced third stage and fairing. With a length of 44.1 m and a first stage thrust of 300 tons, it can launch a payload of 4,680 kg into LEO or 1,650 kg into a sun-synchronous orbit.

A two-stage launch vehicle with storable propellants, suitable for launching a variety of LEO satellites. Developed and manufactured by the Shanghai Academy of Space Flight Technology, the CZ-2D had a typical payload capability of 3,500 kg in a 200 km circular orbit. Its first stage was identical to that of the CZ-4. The second stage was essentially the same as that of the CZ-4, except for an improved vehicle equipment bay.

The largest Chinese launch vehicle, using four liquid rocket booster strap-ons to reach LEO payload capabilities approaching those of the Proton, Titan, or Ariane. The CZ-2E had a maximum payload capability of 9,500 kg. With a perigee kick motor the CZ-2E could put 3,500 kg into GTO.

A planned upgrade of CZ-2E with enlarged boosters the size of the CZ-2C first stage, probably intended for the eventual launch of Chinese space station modules.