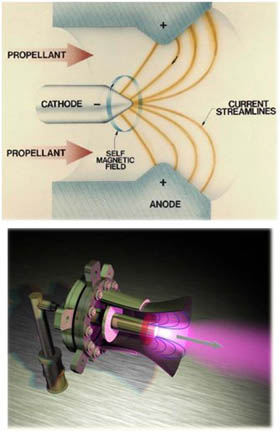 Principle of the MPD thruster.

A magnetoplasmadynamic (MPD) thruster is a form of electromagnetic propulsion. The MPD's ability to convert megawatts of electric power efficiently into thrust makes this technology a prime candidate for economical delivery of lunar and Mars cargo, outer planet rendezvous, and sample return, and for enabling other new ventures in deep space robotic and piloted planetary exploration. MPDs can process more power and create more thrust than any other type of electric propulsion currently available, while maintaining the high exhaust velocities associated with ion propulsion.

In its basic form, the MPD thruster has two metal electrodes: a central rod-shaped cathode, and a cylindrical anode that surrounds the cathode. Just as in an arc welder, a high-current electric arc is struck between the anode and cathode. As the cathode heats up, it emits electrons, which collide with and ionize a propellant gas to create plasma. A magnetic field is created by the electric current returning to the power supply through the cathode, just like the magnetic field that is created when electrical current travels through a wire. This self-induced magnetic field interacts with the electric current flowing from the anode to the cathode (through the plasma) to produce an electromagnetic (Lorentz) force that pushes the plasma out of the engine, creating thrust. An external magnet coil may also be used to provide additional magnetic fields to help stabilize and accelerate the plasma discharge.