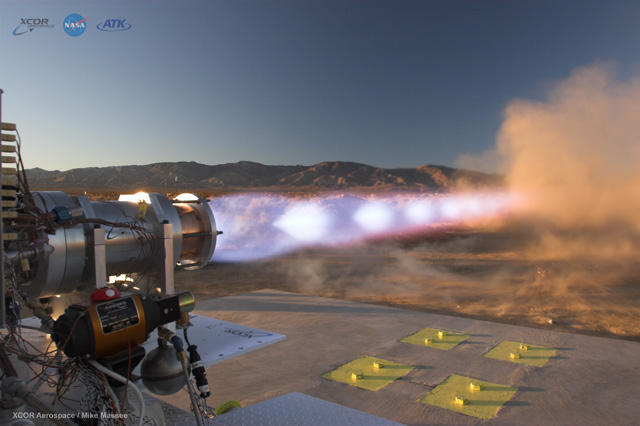 Surprisingly, methane has never been used to propel a rocket or spacecraft. One of the issues surrounding it is that methane needs an ignition source. So-called hypergolic propellants ignite spontaneously when mixed with the oxidizer, but methane must be ignited before it will burn. This may make it harder to use in the outer solar system where planetary temperatures drop to hundreds of degrees below zero. One of the challenges in using methane for deep space missions will be to ensure that the rocket can be ignited reliably in all conditions.

On the plus side, methane has a number of advantages over some currently-used rocket fuels. Liquid hydrogen, for example, which is used as a fuel by the Space Shuttle and many other contemporary launch systems, must be stored at a temperature of –252.9°C – only about 20 degrees above absolute zero. Liquid methane, on the other hand, can be stored at the much higher and more convenient temperature of –161.6°C. As a result, methane fuel tanks wouldn't need as much insulation, making them lighter and thus cheaper to launch. The tanks could also be smaller, because liquid methane is denser than liquid hydrogen, again saving money and weight.

Methane is also relatively safe for use on human missions. While some rocket fuels are potentially toxic, methane is classed as a green propellant and can be handled without the use of a HAZMAT suit.

Potentially the biggest advantage of using methane is that this material occurs abundantly and could be manufactured on many worlds that future spacecraft will visit. On Mars, for example, methane could be made by the Sabatier process, which involves mixing carbon dioxide with hydrogen then heating the mixture to produce methane and water. The Martian atmosphere is an abundant source of carbon dioxide, and the relatively small amount of hydrogen required for the process could be brought along from Earth or gathered in situ from Martian ice.

Further out in the solar system, methane becomes even easier to come by. On Saturn's moon Titan, methane literally falls from the sky. Titan is dotted with lakes and rivers of methane and other hydrocarbons that could one day serve as fuel depots. A methane-powered rocket could allow a robotic probe to land on the surface of Titan, gather geological samples, refill its tanks, and blast off to return those samples to Earth.