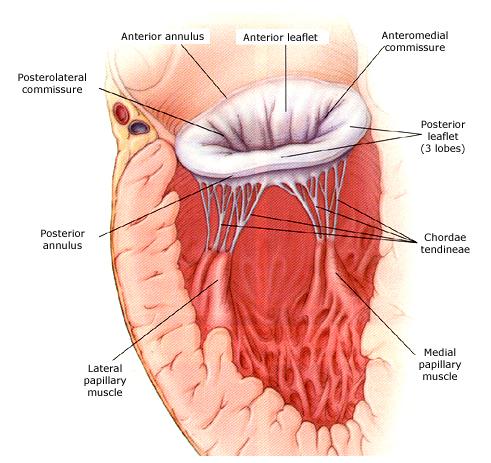 Mitral stenosis is narrowing of the orifice of the mitral valve of the heart. This causes the left atrium (upper chamber) to work harder to force blood through the narrowed valve. The consequences are similar to those of mitral regurgitation (failure of the valve to close properly), which may accompany stenosis.

Mitral stenosis is almost always due to scarring of the mitral valve from an earlier attack of rheumatic fever – a childhood illness that sometimes occurs after untreated strep throat or scarlet fever – although in about half the cases there is no medical record of the illness. Mitral valve stenosis is four times more common in women than in men.

Symptoms of mitral stenosis do not usually develop until adulthood, many years after rheumatic fever. The primary symptom is shortness of breath, which at first occurs only on exertion; as the stenosis worsens, breathing difficulty is felt with less exertion and is eventually present when the person is at rest. Other symptoms and signs include palpitations, atrial fibrillation (rapid uncoordinated, irregular heartbeats), and deeply flushed cheeks. Congestion of the lungs can lead to recurrent chest infections, coughing up of blood, and fatigue. Possible complication are as for mitral regurgitation.

A diagnosis is made from the patient's history, from listening to heart sounds through a stethoscope, and from the results of chest X-rays, an electrocardiogram (EKG), echocardiogram, and cardiac catheterization.

Drug treatment with diuretic drugs and digitalis drugs is broadly the same as for mitral regurgitation, as are the precautions to help prevent infection of the valve (see endocarditis).

If symptoms persist despite drug treatment, balloon valvuloplasty may be considered to stretch the defective valve. Alternatively, heart valve surgery to repair the valve (a procedure known as mitral valvotomy) or to replace the valve may be performed. The outlook following these treatments is generally good, although they may need to be repeated after several years.