muscle operation and contraction by nerves 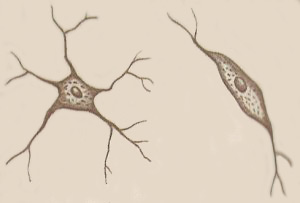 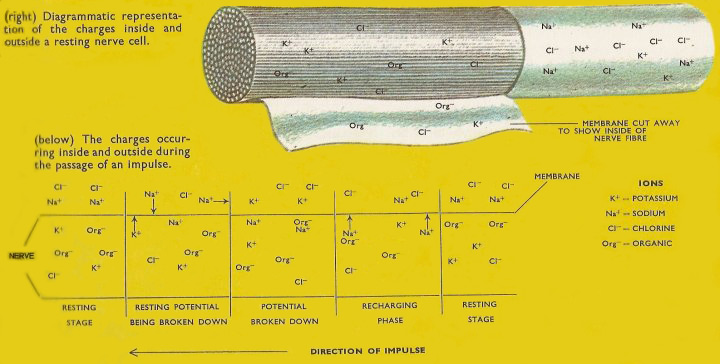 Fig 2. Charges inside and outside a resting nerve cell. 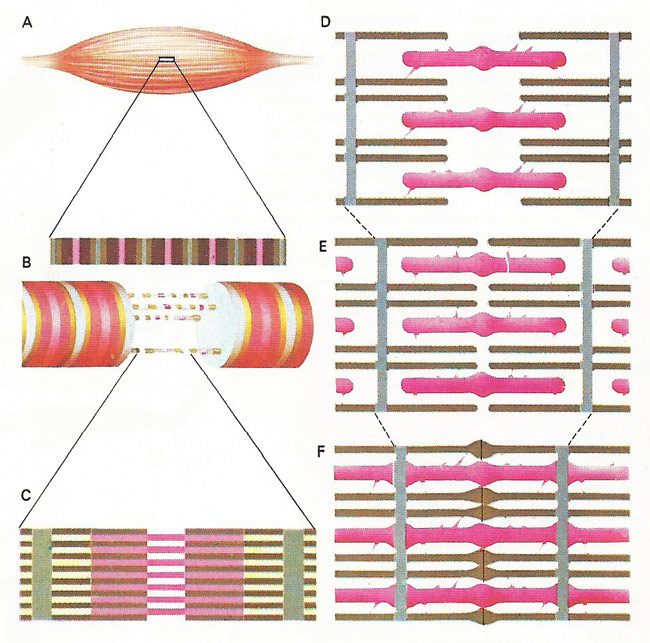 Fig 3. Contraction of voluntary muscle (A) is achieved through many elongated cells of fibers (B), made up of fibrils bound together by a membrane. Each fibril (C) contains two different proteins – actin and myosin – laid down in filaments that are arranged in parallel, creating dark bands. Actin filaments show a spiral configuration and the strands of myosin are studded with tiny, knob-like projections (D). These projections on the myosin filaments (pink) attach themselves to active sites along the actin (brown) i the ratcher-like movement that causes shortening of the muscle fibers (E, F). Nerve impulses trigger the two protein partners.

Fig 4. At the motor end plate the fine branches of the nerve come into close contact with the muscle fibers. 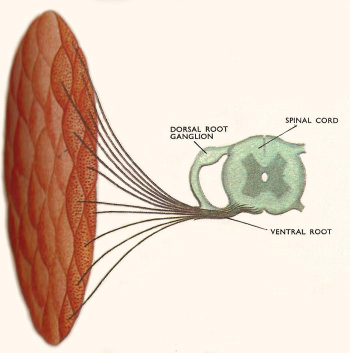 Fig 5. Many hundreds of nerve fibers run from the spinal cord to each muscle in vertebrates but each muscle fiber has only one end plate.

The simplest way a message can get from a sense organ to an effector organ, such as a muscle is by way of the reflex arc. This involves just two neurons (nerve cells) between sense organ and effector. The majority of animal movements, however, are the result of nerve impulses passing along a line of nerve cells. Between the sensory nerve and the motor nerves there are a number of connecting nerves called association neurons. These are not in contact with either sense organ or effector organ and merely pass on the impulses to the next nerve in the chain. The association neurons increase in number as the nervous system increases in complexity.

The simple, unmodified nerve cell consists of the cell body with the nucleus and a number of fine processes which radiate in all directions, making contact with neighboring cells to receive and transmit impulses (Fig 1). The cells are said to be multipolar. Most of the cells in the cnidarian (coelenterate) nerve net are of this type but nerve impulses do not necessarily travel all over the net in all directions. Other cells in the nerve net are bipolar, i.e., the processes are on two sides only. In all animals with a definite pattern to their nervous system, the typical conducting nerve cells are elongated. One of the processes grows out to form the axon of the nerve cell and in some motor neurons may be several feet long, (e.g., a nerve may pass from the spinal cord to the foot of an animal without interruption). Neurons of this type are said to be polarized. Impulses normally travel only in one direction along the axon, although they can travel in both directions.


How a nerve impulse travels

An impulse is picked up by the dendrites (fine branches) at the end of the neuron and passes through the cell into the fine endings at the other end. These make contact with those of neighboring neurons but the cytoplasm does not join across the gap. The junction is called a synapse.

Although the structure and arrangement of the neurons varies, the nature of the nerve impulse appears to be the same in all animals. When a receptor is stimulated (e.g. when hot water burns the heat-sensitive cells in your hand) and electrical disturbance is set up and transmitted in its nerve, as a series of electric currents which can be detected and measured by placing tiny electrodes on the nerve concerned and connecting them to an amplifying device and a meter (see Figure 2).

The nerve cell is covered on the outside by a thin sheet of tissue (a membrane). When the cell is at rest (i.e. when there is no current moving through it) the membrane allows potassium and chloride ions to pass in and out of the nerve but not sodium ions. The latter are very abundant in the surrounding tissues. Organic ions, negatively charged, balance the potassium ions in the nerve and create a negative charge on the inside of the membrane. The sodium ions create a positive charge on the outside and the difference between the two charges is called the resting potential and is of the order of 80 millivolts (eighty thousandths of a volt). When the nerve fiber is stimulated by the receptor the properties of the membrane are altered and sodium ions are allowed to pass inward. When they do this they neutralize the excess organic ions within the nerve cell and cause a negative charge to occur on the outer surface. Sodium ions on neighboring parts of the surface then move along and the resting potential breaks down on the next part of the nerve fiber and the inflowing sodium ions set up a current there. In this way a current is set up all the way along a fiber.

As the surface potential is destroyed in the process of conducting an impulse, the nerve fiber cannot conduct further impulses the resting state has been regained by pumping the sodium out of the nerve cells. The period required for this is called the refractory period and in mammalian nerve fiber is about 2 millisec. Because of the need for this recharging period, the mammalian nerve cell cannot conduct impulses more frequently than about 500 per sec. In practice the frequency will be much lower, 50 to 100 impulses per sec. The sense organ itself regulates the frequency with which it sends impulses. All impulses in a particular nerve fiber are of the same size. A stronger impulse will cause more frequent impulses not larger ones. If a sense organ is stimulated it will produce a reaction in the nerve but unless the stimulus is large enough there will be no impulse. If an impulse is set up it will be complete and of the standard size. This is known as the all or nothing law of nerve conduction. The size of an impulse does vary, however, with the condition of the nerve. A thick nerve cell will conduct a larger impulse than a smaller process of the nerve. A nerve fiber affected by drugs will also carry only a small impulse. The size of an impulse does not decrease as the distance traveled increases. It travels without decrement.

On the way to the effector organ the nerve impulse has to cross one or more synapses. When stimulated by the impulse, the nerve fiber ending produces a minute amount of a chemical called acetylcholine. This acts on the endings of the adjacent neuron and changes the permeability of the membrane. Sodium ions enter and the chain of electrical disturbances continues through this neighboring nerve cell. As soon as it is produced, acetylcholine is attacked by the enzyme acetylcholinesterase and is destroyed. If this did not happen the nerves would effectively be poisoned. Some insecticides work by destroying acetylcholinesterase and so poisoning the nervous system of the insects.

When the nerve impulse reaches a muscle its electrical energy must be made to liberate mechanical energy in muscle contraction. Most of the work on contraction is done with striped muscle, which makes up most of the body's musculature. The muscles are made up of large numbers of cells each of which has one or more connections with a motor nerve ending. In vertebrates there is only one connection but arthropod muscle fibers have several motor nerve endings. The junction between nerve fiber and muscle fiber is known as a motor end plate (Fig 4).

A nerve impulse, arriving at the junction causes the release of acetylcholine which affects the muscle membrane. Ions are allowed to pass in and out in much the same way as in nerve cells and the current set up triggers the contractile mechanism in the muscle fiber. Again the response is "all or nothing". When a single impulse reaches a vertebrate muscle fiber the fiber will contract and then relax. This response is called the muscle twitch. A series of quick impulses will keep the muscle fiber contracted since it will have no time to relax. This prolonged contraction is called a tetanus. Tonic contraction is the term applied to partial contraction of a muscle which can be maintained for a long period. This is possible in vertebrate striped muscle because there are hundreds of nerve fibers supplying each muscle (Fig 5). Each fiber branches two or three times and each ending supplies one muscle fiber. Impulses in a few nerve fibers will therefore cause only part of the muscle to contract. There is still complete contraction in each individual fiber affected. Tetanic contraction of striped muscle requires much energy, but tonic contraction of unstriped muscle can be maintained for long periods without fatigue.

Whereas vertebrate muscle is innervated by a large number of nerve fibers, arthropod muscle is supplied by only a few (1–5) nerve fibers. Each fiber branches many times and has several nerve endings. Local contraction of a fiber is thus possible.