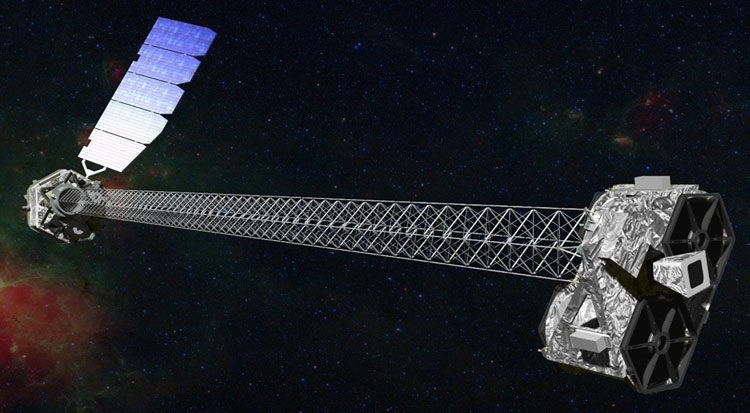 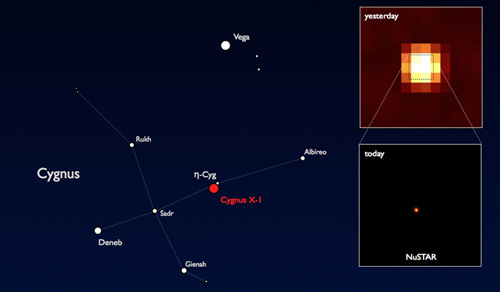 NuSTAR (Nuclear Spectroscopic Telescope) is the first space telescope that can bring high-energy X-rays (with energies of tens of keV) from sources such as black holes to a crisp focus. The observatory was launched by NASA on Jun 13, 2012 and returned its first images – of the most famous stellar black hole, Cygnus X-1 – two weeks later. The sharpness of these early images is a vast improvement over the blurry X-ray pictures of this object sent back by previously launched X-ray observatories, such as NASA's Swift and Chandra space telescopes, and the European Space Agency's XMM-Newton. NuSTAR's instrumentation has about 10 times the resolution and 100 times the sensitivity of any past X-ray missions working in the same wavelength range.

NuSTAR's prime mission is intended to last two years. During this time, NuSTAR will study some of the most energetic objects in space including black holes within our galaxy and beyond, young supernova remnants, and jets coming from the hearts of active galaxies. Its observations of black holes will help us better understand how many of these objects there are, both in the Milky Way Galaxy and in extragalactic space, how fast they spin, and what is happening in the most dynamic regions of black holes, where matter is racing around the central gravity pit at incredible speeds and being heated to millions of degrees. Other targets for the spacecraft include the surface of the Sun and large clusters of galaxies.

A key feature of NuSTAR is the 10-m (30-ft) long mast that separates the X-ray detectors from the optical gear which brings the X-rays to a focus. NuSTAR works in the 6–79 keV region of the X-ray spectrum and uses two co-aligned grazing-incidence telescopes together with newly-developed detectors that push the sensitivity of the observatory to energies higher than those of earlier missions.