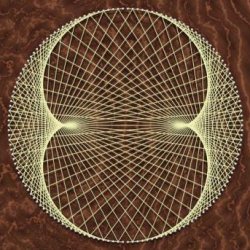 String model of a nephroid by Adrian Rossiter.

A nephroid is a type of curve often seen on the surface of a cup of coffee in the sunshine – a crescent of light formed by sunlight reflecting off the inside of the cup onto the surface of the drink. More generally, it is the shape made by parallel rays of light reflecting from the inside of any semicircle. In mathematical terms, this means that the nephroid is the catacaustic (see caustic curve) of a circle when the light source is at infinity, a fact first demonstrated by Christiaan Huygens in 1678 and published by him in his Traité de la lumière (1690). A physical explanation wasn't forthcoming, however, until 1838 when George Airy gave a proof in terms of the wave theory of light.

The name 'nephroid' (from the Latin for 'kidney-shaped') was introduced in 1878 by the English mathematician Richard Proctor in his book The Geometry of Cycloids. Prior to that it was known as a two-cusped epicycloid.

Specifically, the nephroid is the epicycloid formed by a circle of radius a rolling around the outside on a fixed circle of radius 2a. It has a length of 24a, an area of 12π2, and is given by the parametric equations:

The nephroid is the involute of Cayley's sextic and is also the envelope of circles with their centers on a given circle, touching a given diameter of that circle.

The nephroid has been described as the perfect shape for a multi-seat dining table. Not to be mistaken with the ordinary nephroid, just described, is Freeth's nephroid, named after the English mathematician T. J. Freeth (1819–1904) who first wrote about it in a paper published by the London Mathematical Society in 1879. Freeth's nephroid is the strophoid of a circle and has the polar equation r = a(1 + 2sinθ/2). Freeth's nephroid is also the name of group of mathematicians, mostly from Royal Holloway College, London, who gather weekly in a pub called the Beehive and compete in games of trivial pursuit.