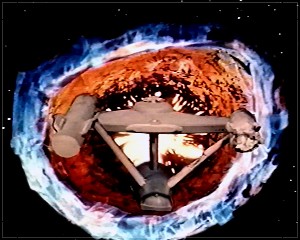 In the Star Trek episode 'The Doomsday Machine', the extragalactic planet killer is supposedly composed of pure neutronium.

Neutronium is the densest possible kind of matter outside of a black hole; the term is a somewhat informal one but applies to a genuine scientific concept. Neutronium, of which neutron stars are composed, consists primarily of neutrons packed closely together. In this state, the neutrons repel each by degenerate neutron pressure (see baryon degenerate matter).

Fictionally, neutronium is mentioned in at least four Star Trek episodes. In 'The Doomsday Machine' (original series), the extragalactic planet killer (see photo and also separate entry on Doomsday Machine) is supposedly composed of pure neutronium, rendering it impervious to phaser fire. In 'Evolution' (Next Generation), periodic explosions on the surface of a neutron star in the Kavis Alpha Sector expel particles of neutronium (presumably small clumps of neutrons – though these wouldn't stick together outside the intense gravitational field of the star) at relativistic speeds. Neutronium is also mentioned in the ST:TNG episode 'Relics.' The Enterprise encounters not only Scotty from the original series but also a Dyson sphere, the interior surface of which is composed of a neutronium alloy which is virtually impenetrable. In the Star Trek: Voyager episode 'Think Tank,' Voyager and its crew encounter highly intelligent aliens whose ship's outer hull is lined with neutronium. (Thanks to www.neutronium.co.uk – heavy metal concert organizers! – for the "Relics" tidbit and to an anonymous correspondent for the Voyager episode info.)