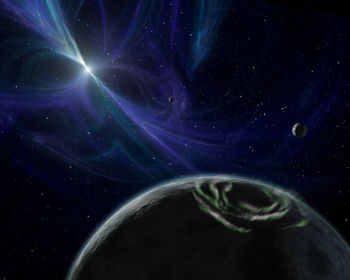 Artwork of pulsar PSR 1257+12 and its system of planets. Credit: NASA.

PSR 1257+12 is a millisecond pulsar in the constellation Virgo discovered in 1990 by Alexander Wolszczan of the Arecibo Observatory. Around it, in 1991, Wolszczam and Dale Frail of the National Radio Astronomy Observatory in New Mexico found the first planets to be subsequently confirmed outside the Solar System. The initial announcement was of two objects (b and c) similar in mass to the Earth.1 This was followed by claims for a third, Moon-sized body (a) in 1994,2 and a possible fourth, Saturn-sized planet (d) in 1996. The planets were discovered by the pulsar timing method.

The existence of the innermost, lunar-mass member of the system was called into question by Klaus Scherer of the Max Planck Institute in Katlenburg-Linda, Germany. The period of this supposed planet, 25.3 days, is the same as the rotational period of the Sun, leading Scherer to suggest that the 25.3-day periodicity in PSR 1257+12's timing is an artifact caused by the solar wind. A similar effect has been found in the measured velocity of the deep space probe Pioneer 10. No doubt remains about the reality of the Earth-mass planets, however, following the matching of a gravitational perturbation model with the pulsar timings.

In 2005, Wolszczan and Maciej Konacki, of the California Institute of Technology, announced the discovery of a genuine fourth planet in the system with an orbit approximately six times larger than that of the third planet and remarkably close to the mean distance of the asteroid belt from the Sun. Wolszczan commented: "Because our observations practically rule out a possible presence of an even more distant, massive planet or planets around the pulsar, it is quite possible that the tiny fourth planet is the largest member of a cloud of interplanetary debris at the outer edge of the pulsar's planetary system, a remnant of the original protoplanetary disk that created the three inner planets". The small planet, about one-fifth of the mass of Pluto, may occupy the same outer-boundary position in its planetary system as Pluto does in our solar system. See also pulsar planets.