The Pipe Nebula and environs captured by the Wide Field Imager on the MPG/ESO 2.2-m telescope at ESO's La Silla Observatory. 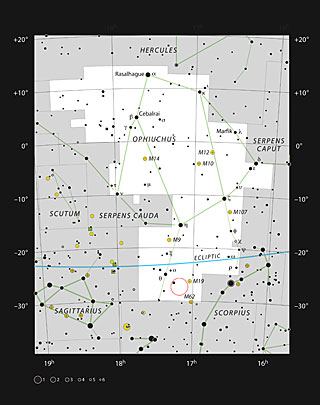 Location of the Pipe (red circle).

The Pipe Nebula is an interconnected series of dark nebulae which appears as a sinuous rift in the star fields of Ophiuchus. The blackest, central portion is shaped somewhat like an old-fashioned smoker's pipe, but the whole structure extends from the region of the Rho Ophiuchi Nebula and the Lagoon Nebula, and takes in a number of dark nebulae, including Barnard 59 (at the western tip of the Pipe, just south of NGC 6293), 65, 66, 67, 77, 244, and 256. It lies at a distance of 600–700 light-years and spans about six light-years.