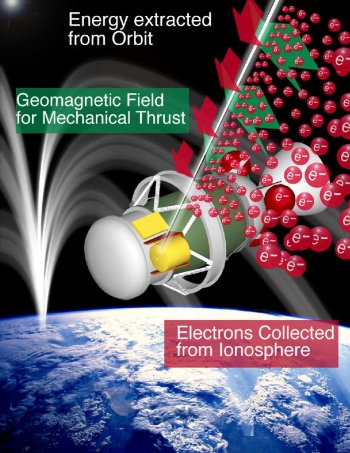 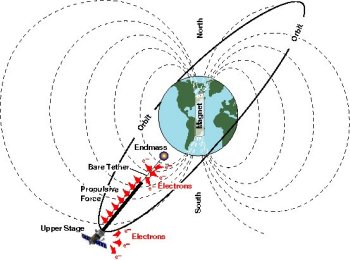 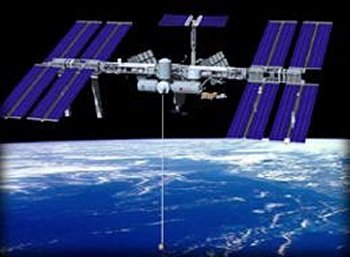 The International Space Station could use bare-wire tethers to raise its altitude a few meters every day. This would make up for atmospheric drag and save several hundred million dollars a year in the cost of carrying up chemical propellants for rocket engines. Extra science payloads could be carried instead. Credit: NASA. 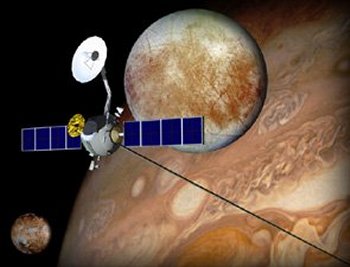 A tether propulsion system could adjust the orbit of spacecraft exploring Jupiter's moons. Without the need for chemical rockets, the spacecraft could operate longer and would accommodate more science instruments. Credit: NASA.

Propulsive Small Expendable Deployer System (ProSEDS) was a NASA space tether propulsion experiment intended to be a follow-up to SEDS. Like SEDS, ProSEDS was to have been deployed from a Delta II, but would have used a conductive tether, instead of a nonconductive one, to allow electromagnetic orbital adjustment. The ProSEDS tether would have been 15 km long, with 10 km insulated and the last five bare. It was originally intended to be flown along with a launch of a Global Positioning System satellite in the spring of 2003, but was withdrawn at the last moment, due to concerns that the tether might collide with the International Space Station. For various reasons, ProSEDS was then cancelled.

The concepts behind ProSEDS were derived from the TSS (Tethered Satellite System) flown on the Space Shuttle in 1995 and 1996. Although the tether broke as it reached its 19.6-km (12-mi) length on its 1996 flight, scientists gathered much data about tether behavior during five hr of operation. TSS used a large deployment mechanism, resembling a deck winch, in the Shuttle payload bay. The winch unreeled 20 kilometers of insulated, conducting tether with a spherical satellite at the end. As the Shuttle orbited the Earth, the electrical wire cut through Earth's magnetic field , and the motion produced an electrical current. Electrons were collected by the satellite, through the tether, and flowed out the Shuttle by way of an electron gun that dumped the charge as it built up. Scientists found that the tethered system produced more current that expected from theoretical models. Specifically, the models require that the voltage be 10 times greater to collect a current than what was observed. Before the flight, the models predicted that the tether would produce 0.5 amp under ideal conditions. Instead, it produced more than 1 amp under less than ideal conditions.

The models were a factor of two or three off because they did not include the effects of orbital motion through the plasma (electrified gas) of the ionosphere. While motion of a conductor through the magnetic field is crucial (it is also how a generator in a power plant works), motion through the electrons in space was thought to be a miniscule effect. The Shuttle moves at 7.7 km/s (17,500 mph) while the electrons move at 200 km/s (115,000 mph). It turns out that the current carried by those electrons connected well with the tethered system and contributed significantly to the power generated.

J. R. Sanmartin of the Polytechnic University of Madrid, Spain, predicted that a tethered system did not need a large sphere at the end of the line to work. The motion of a satellite through space generates a plasma shield that stands off about 1 centimeter (0.4 in) away from the spacecraft surface. On the 1.8-m (6-ft) diameter TSS, that 1 centimeter standoff added only about 2% to the collecting area. On a wire, it would increase the collecting area 400-fold or more, so that an 82-m wire would have as much effective collecting area as the 1.8-m sphere. If this new bare wire tether worked as theory predicts it would allow the collection of considerably more current for a given length of tether. As a result, shorter tethers could be used for propulsion or to generate electrical power.


applications to the ISS and future satellites

One application of this, potentially, is to produce power or thrust on the International Space Station. The tether could provide extra electricity to the station, or help maintain its altitude so it does not re-enter Earth's atmosphere. The tether would produce only a small force. The force on the Shuttle was 0.4 newton (0.1 lb). But applied steadily, for hours or days, it would make a difference. Les Johnson of Marshall's Advanced Systems and Technologies Office predicted that a 10-km (6-mi), 10 kW tether system could boost a 1,000-kg (2,200-lb) satellite as much as 400 to 540 km in one day, depending on the orbit and other conditions.

ProSEDS would have been much smaller than the Shuttle's TSS. In operation on future satellites, the tether, would look more like dental floss than TSS's high-tech rope and would unreel from a bobbin in a can. The can would be released from the satellite and the difference in Earth's gravity, even across a difference of a few feet in altitude, would pull the can down. Eventually, the tether would be unwound to a distance of 25 km. About 5 km (3 mi) of tether near the spacecraft would be bare; the rest would be non-conducting and provided to put enough distance on the tether so it stays taut.

In the ProSEDS demonstration flight, the satellite was to have been the second stage of a Delta rocket. ProSEDS would have ridden as a piggyback payload for the launch of a larger satellite. The tether bobbin would have stayed on the rocket and a weight unreeled upward on the tether. After the satellite had been injected into orbit, the second stage normally would be slowly pulled back from 400 km (240 mi) to Earth by atmospheric drag. After 120 days, it would re-enter and burn up.

Operated the other way around, a tether powered by solar cells – such as those on International Space Station – would boost a satellite's orbit and keep it from re-entering.

A reusable space tug – called an electrodynamic tether upper stage – could be built using the propulsive tether to haul satellites from a launch vehicle in low orbit to higher orbits. The sky is not quite the limit on propulsive tethers. The technique requires an ionosphere, a region of electrified gas which acts as part of the electrical circuit. Around the Earth, it tapers off around 1,500 km (900 mi).

However, conditions are right around the moons themselves. This would eliminate the problem of storing chemical propellants at the right temperatures so they work in deep space, or carrying complex electrical thrusters. Io is most interesting because it is electrically connected through its volcanoes which spew sulfur dioxide into space.