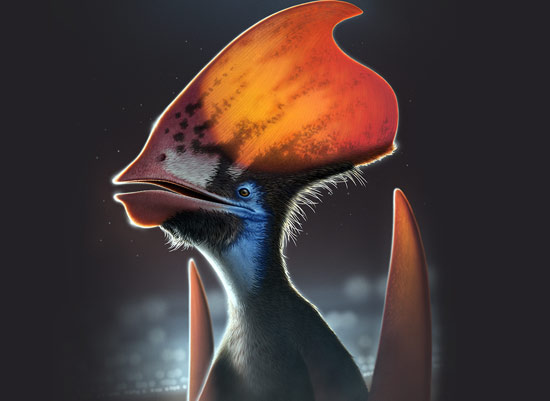 Fig 1. The head of a Tupandactylus imperator, with brightly colored feathers, based on the results of a 2022 study.

Pterosaurs were flying reptiles – Earth's first true vertebrate flyers – which lived during the Jurassic and Cretaceous periods, 190–135 million years ago. They had greatly enlarged fourth fingers that supported membranous wings much like those of modern bats. They also had feathers although these were not needed for flight and must have served other purposes instead.

Analysis of the partial skull of a 113-million-year-old pterosaur fossil, believed to be of Tupandactylus imperator, reported in 2022 [1, 2], indicated that the animal had two types of feather. On its head it had whiskerlike, single filaments and also more complicated branching structures similar to to those of modern bird feathers. Soft tissues from the same specimen yielded a variety of different shapes of pigment-bearing melanosomes in both feathers and skin. Different melanosome shapes have been linked to different colors. The range of melanosome geometries found in this Tupandactylus specimen suggests that the creature may have been quite colorful, which suggests that the feathers were not there just to keep the creatures warm, but may have been used for visual signaling, such as displays to attract a mate.

Many dinosaurs, particularly theropod dinosaurs, also had colorful feathers. That could mean that feathers – and vibrant displays of mate-seeking plumage – may have originated as far back as the common ancestor of dinosaurs and pterosaurs, during the early Triassic period around 250 million years ago, following the mass extinction at the end of the Permian that killed off more than 90 percent of the planet’s species. If feathers did evolve during that time, they, as well as warm-bloodedness, may have been part of an arms race between reptilian mammal ancestors called synapsids and the pterosaur-dinosaur ancestor.

Note: The term "pterodactyl" is commonly used to describe winged reptiles which are properly called pterosaurs.