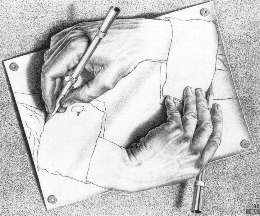 No, seriously. Recursion is a process that wraps back on itself and feeds the output of a process or function back in as the input. Using some sort of recurrence relation, an entire class of objects can be built up from a few initial values and a small number of rules. The Fibonacci numbers, for example, are defined recursively, as are many fractal figures. Self-recursion, of which the first two lines of this entry are an example, leads to an endless feedback loop.

One, somewhat disturbing, notion of reality is that we live in a recursive universe in which nature resembles an infinite nest of Russian dolls. One day, we will simulate the Big Bang in one of our supercomputers. Inside this artificial universe (rather like an immense Star Trek holodeck simulation) will evolve new star systems and new life forms. They too will evolve intelligence one day and invent computers. And they too may one day simulate the Big Bang inside one of their supercomputers. This chain of existence will continue as long as we continue to run our simulation. Our universe will continue to exist as long as our parent universes continue to run their simulations. And therein lies madness.

Strictly speaking, a recursive function is a function that is computable. However, in the usual sense of the word, a function is said to be recursive if its definition make reference to itself. For example, factorial can be defined as x! = x(x - 1)! with the base case of 1! equal to 1.