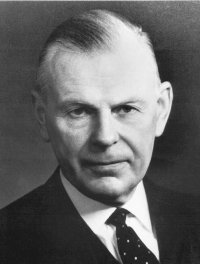 Bengt Strömgren was a Swedish astronomer who did important research in stellar structure in the 1930s but is best known for his work on ionized gas clouds – H II regions – around hot stars. He surveyed H II regions and found relations between the gas density, the luminosity of the star, and the size of the Strömgren sphere (see below) of ionized hydrogen around it.

Son of the director of the Copenhagen University Observatory, Svante Strömgren (1870–1947), he had published many research papers, mostly in celestial mechanics, and coauthored a book by the time he received his PhD from Copenhagen at age 21. After working there and at the Yerkes Observatory he succeeded his father at Copenhagen in 1940. He was director of Yerkes and McDonald Observatories from 1951 to 1957 and spent 10 years at the Institute for Advanced Study in Princeton before returning to Copenhagen.

A Strömgren sphere is the region of fully ionized gas around a hot star, also known as an H II region. It is named after Bengt Strömgren who first derived the relationship between the density of the nebular gas, the temperature of the central star, and the radius, known as the Strömgren radius, within which hydrogen is almost completely ionized.