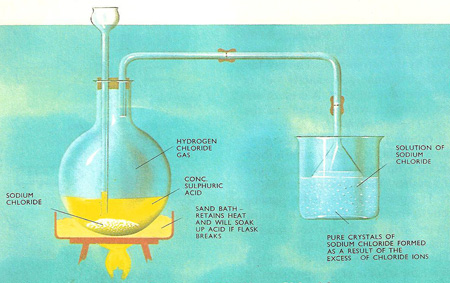 Purification of sodium chloride. The concept of solubility product can be used in purifying a comparatively soluble substance. For instance, sodium chloride may be purified by passing hydrogen chloride gas into a saturated solution of the salt. As the solution is already saturated, increasing the concentration (or active mass) of either sodium or chloride ions brings about crystallization. This is known as the common-ion effect. So pure crystals of sodium chloride come out of solution leaving impurities behind in the solution. 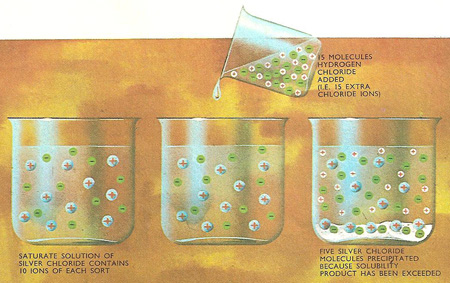 The system of analysis used for identifying the metallic ions present in a mixture of inorganic compounds depends upon the very low solubilities of certain salts of the metals. Silver, lead, and mercury (I) ions are detected first because a precipitate of silver, lead, or mercury (I) chloride is formed when hydrochloric acid is added to the solution. Then the metals whose sulfides are insoluble in acidic solution are separated by passing hydrogen sulfide gas through the solution. So, in turn, all metals are separated into groups.

When salts are dissolved in water, and all of them dissolve, if only very slightly, some of the dissolved molecules divide up into ions. For example, each molecule of sodium sulfate which ionizes yields two sodium ions (each with a single positive charge) and one sulfate ion with two negative charges. Molecules of silver chloride split up into equal numbers of silver ions (with single positive charge) and chloride ions with single negative charges.

When a salt which is only slightly soluble has been in contact with water for some time, the water will have become saturated with the salt – no more of the salt will dissolve. But although the concentration of the solution cannot increase at the particular temperature, some molecules of the salt will continue to pass into solution while an exactly equal number will crystallize out. Equilibrium will also exist between the dissolved molecules and the dissociated ions – no sooner has one molecule ionized than other ions come together to reform a molecule.

By applying the law of mass action to this equilibrium, it follows that the product of the concentrations of the ions produced when the solute molecules ionize will also be constant. This constant, which is, of course, dependent upon temperature, is called the solubility product. If, for any reason, the product of the ionic concentrations rises above this figure for the particular solution, precipitation will take place and will continue until the product has fallen to the original level.

If, for instance, the original solution contained silver nitrate, the addition of a few drops of dilute hydrochloric acid will probably cause some silver chloride to be precipitated because the solubility product of this compound has been exceeded. However, there are still many silver ions in solution, and the addition of each extra drop of hydrochloric acid will cause more silver chloride to come out of solution. But even when the number of chloride ions in solution equals the number of silver ions, not all the silver chloride will have been precipitated. This can be remedied by adding more hydrogen chloride, since raising the concentration of chloride ions automatically reduces the concentration of silver ions.

It is because of this effect that in qualitative analysis the majority of reagents have to be added in excess. Otherwise small, but significant quantities of ions which should be completely removed in Group II remain in solution and upset the identification of other metallic ions in later groups.