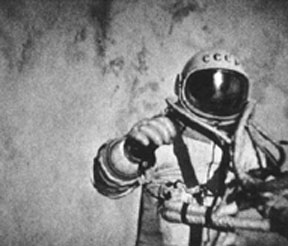 Alexei Leonov conducts the first spacewalk in history on March 18, 1965, during the Voskhod 2 mission.

A spacewalk is an excursion outside a spacecraft or space station by an astronaut wearing only a spacesuit and, possibly, some sort of maneuvering device. A standup spacewalk is when the astronaut remains partially within the spacecraft, for example in the case of a Gemini astronaut who stands up in his seat with one of the capsule hatches open while in orbit. Stand-up spacewalks were common in the early days of the space program when spacecraft were not equipped with airlocks.

Spacewalks and moonwalks are collectively known as extravehicular activity. The 100th EVA in history (both US and Soviet, Earth orbit and lunar) occurred on Sep 15, 1992, when Anatoli Solovyov and Sergei Avdeyev completed their fourth EVA to install a 70-kg VDU on the Sofora Girder located on the external skin of the Kvant module of the Mir space station.