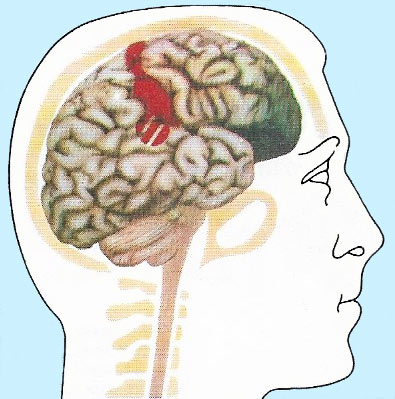 Fig 1. The region of the brain that analyses sensations such as touch and pressure and heat and cold is the sensory cortex. The primary area is colored solid red; the secondary area is shown striped. 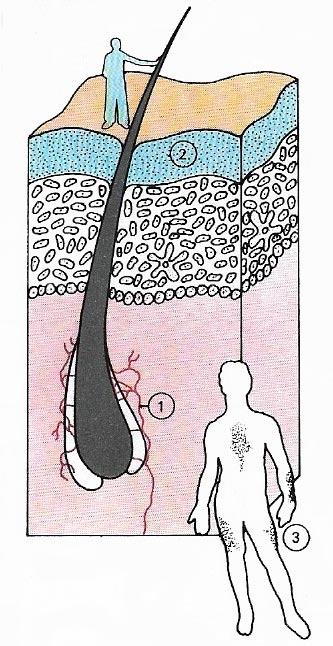 Fig 2. The sensation of touch usually results from mechanical distortion of various types of sensory receptors in the skin. Touching a hair affects free nerve endings that form a web (1) around hair follicles beneath the epidermis (2). These hair end organs are distributed over the body (3). 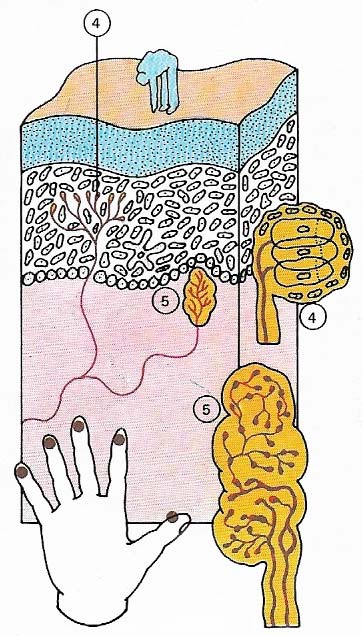 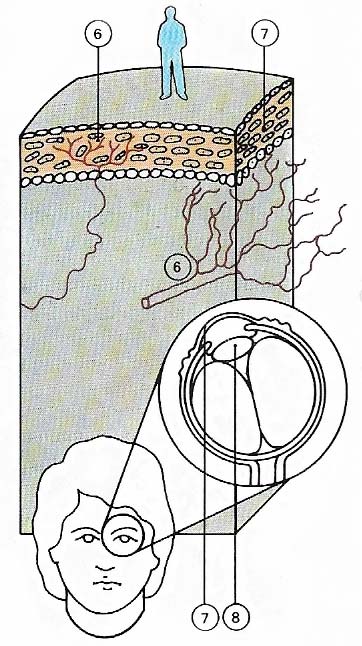 Fig 4. In the eye receptors of this type (6) serving the epithelium of the cornea (7) above the lens (8) respond to the lightest contact. 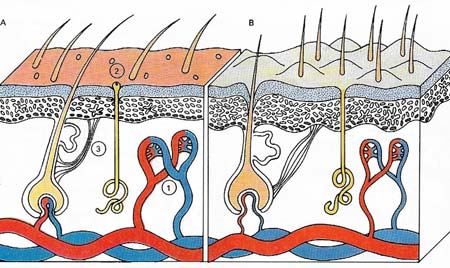 Fig 5. Body temperature is adjusted by the hypothalamus of the brain, which signals changes in the skin in response to sensations of heat and cold. A rising temperature (A) causes blushing of the skin as blood vessels (1) dilate to allow heat to be radiated from the surface. Evaporation of sweat (2) and relaxation of hair erector muscles (3) cool the skin. When cold (B), blood vessels constrict making the skin look blue and hair stand on end, causing 'goose-flesh'. 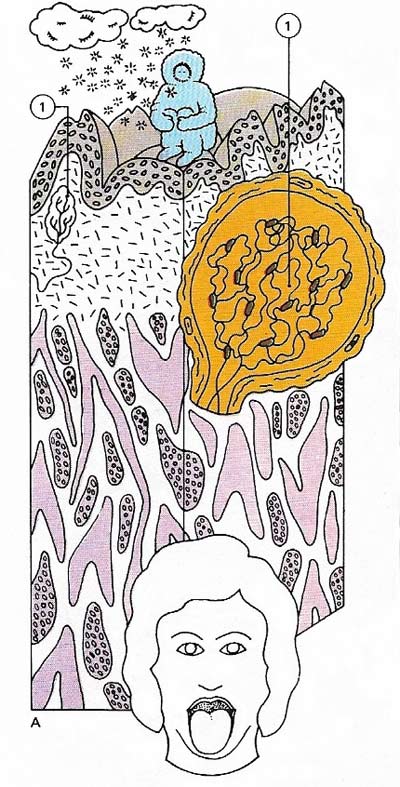 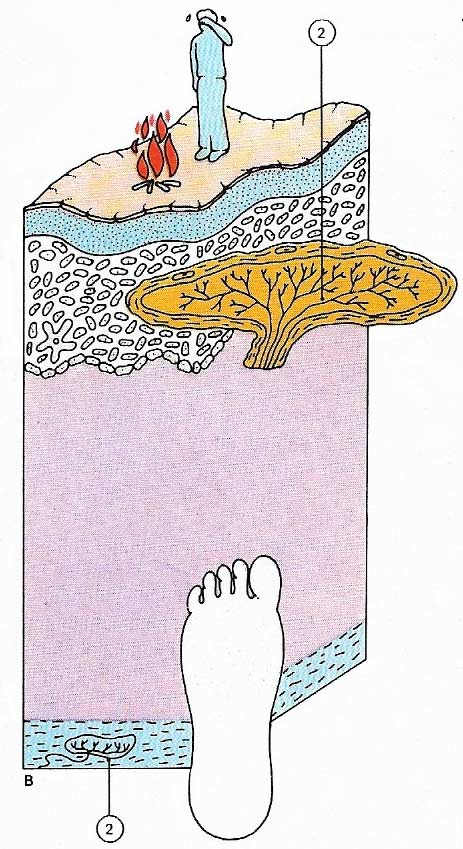 Fig 6. Two kinds of skin receptors specialized to detect thermal changes are Kraus end bulbs (1), which respond to cold, and Ruffini corpuscles (2), which react to heat. Kraus end bulbs are most prevalent in the mucosa of the tongue, the conjunctiva of the eye and the external genitalia. Ruffini corpuscles, found deep in the dermis of the skin, or even in the subcutaneous layer, are flatter in shape and particularly abundant in the soles of the feet.

Amid the wealth of information that is constantly fed to the brain is a stream of messages about the sensations of touch, pressure and temperature. These stimuli, which often demand minor adjustments in our everyday lives, originate in the skin, the body's main contact with the outside world. It is in the skin, therefore (and in the mucous membrane, such as that lining the mouth and vagina, that is a modification of the surface skin), that some of the body's most sophisticated sensory equipment is located.

Physical sensations are detected by sensory receptors – specialized nerve extremities that respond best (but not exclusively) to a particular type of stimulus. In the skin these include mechanoreceptors that are involved in detecting touch and pressure, and thermoreceptors for sensations of heat and cold. Itch, tickle and vibration have no specific nerve endings of their own; itching is caused by mild stimulation of the pain receptor, tickle is the result of light agitation of touch receptors and vibration is felt via pressure receptors. Receptors are also concentrated in the ear, eye, nose, and tongue. Sensitivity to a particular stimulus is not necessarily uniform all over the body. Receptive fields may overlap, thus boosting the level of sensation, and in many cases the density of nerve endings varies. There are more touch receptors on the tongue and fingertips, for example, than in body areas such the back (which explains why it is so difficult to judge how many fingers someone is using to touch your back). Most receptors can adapt to unimportant stimuli and it is for this reason that we do not continuously feel the presence of our clothes.

Significant stimuli are converted into nerve impulses to travel, by way of the spinal cord, to a center in the brain known as the thalamus. The thalamus provides vague awareness (as opposed to the fine discrimination) of sensory stimulation, determines its quality, pleasant or otherwise, and may also be responsible for interpreting pain. But the essential function of the thalamus is that of integrating sensory material – grouping together impulses of the same nature from different parts of the body – for onward transmission to the sensory cortex, the region of the brain that analyses sensations. Underlying the thalamus is a smaller structure called the hypothalamus, which, among other activities, regulates body temperature.

Pain is the most dramatic and in some ways the most puzzling of the senses that play a part in keeping us alive. Pain is felt in different ways: "bright" or pricking pain such as that associated with a cut finger is intense, short-lived and easily localized to the part of the body affected; "burning" pain is slow to develop, longer-lasting and less easily localized; and "aching" or visceral pain is persistent, often nauseating and may be referred away from the pain source. The anomaly of referred pain is due to the entry of impulses from the affected area into the spinal cord and their stimulation of neighboring nerve fibres from the skin.

Both the sensory end organs and the neural pathways that conduct pain sensations to the central nervous system – the spinal cord and the brain – are so varied that there is dispute about the existence of specialised "pain nerves". Pain may be the result of excessive stimulation of any nerve fibre. Sometimes damage to the neural pathways gives rise to spontaneous pain, referred to the area supplied by the pathway and coupled with sensory loss. Mostly burning in character, spontaneous pain arising from an old injury to peripheral nerves is known as causalgia and is nearly always referred. Similarly, spontaneous central pain occurs when more central structures, such as the spinal cord or thalamus, have been damaged. The bizarre sensations that are a common legacy of amputation are known as phantom-limb pains. Causalgia, central pain and phantom-limb pain are known as neurogenic pains.

Research has shown that both human beings and animals quickly learn to evaluate the experience of pain as a result of events in infancy. There is evidence that undue protection from damage reduces the ability to feel pain or to evaluate painful stimuli. Sensory deprivation of this kind is potentially dangerous in that pain is an important protective sensation – securing withdrawal of the tissues from harmful agents – as well as a useful indicator of disease. Some people suffer from congenital nervous abnormality that drastically reduces or totally excludes the ability to sense pain – a rare condition known as hypoesthesia. They face a far higher risk of injury and without pain to signal the need for treatment their life expectancy is shorter than average.

Pain, like all other experience, is entirely subjective and often considerably affected by psychological factors. Soldiers, for example, can suffer fearful wounds in battle without noticing them until later. All the techniques so far available for measuring so-called pain thresholds are open to criticism and all that is known for certain is that men are more sensitive to pain then women, that office workers are more sensitive than manual workers and anxious people more than calm types.

Touch is the sensory system concerned with surface sensation, found in all external body surfaces including the skin and some mucous membranes. Touch sensation is crucial in the detection and recognition of objects at the body surface, including those explored by the limbs, and also in the protection of these surfaces from injury. Functional categories of touch sensation include light touch (including movement of hairs), heat, cold, pressure, and pain sensation. These are to some degree physiologically distinct. Receptors for all the senses are particularly concentrated and developed over the face and hands. When the various types of skin receptor are stimulated, they activate nerve impulses in cutaneous nerves; these impulses pass via the spinal cord and brain stem to the brain, where coding and perception occur. With painful stimuli, reflex withdrawal movements may be induced at the segmental level.