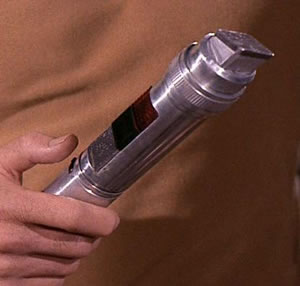 A universal translator is a hypothetical device that automatically, in real time, translates spoken words in one language to those in any other. Much use of it has been made in science fiction. For example, it is used in the Star Trek universe to avoid plot complications arising from different intelligent species, for example, humans and Klingons, attempting to communicate with each other.

According to Trek mythos, on Earth the universal translator (UT) was invented shortly before 2151 but still experimental at the time of the launch of the first starship Enterprise (ENT: "Broken Bow"). This version of the UT could be used for ship-to-ship communications only; for face-to-face communication or off-world missions, a skilled linguist was required – in Enterprise's case, Hoshi Sato. By 2267, the UT had been miniaturized into a handheld, wand-like device. Captain Kirk of the USS Enterprise used one to communicate with the alien known as the Companion in the Gamma Canaris system (see plasma-based life). Responding to Zefram Cochrane's question about the theory of operation, Kirk explained that there are certain universal ideas and concepts common to all intelligent life. The translator compares the frequencies of brainwave patterns, selects those ideas it recognizes, and provides the necessary grammar. Kirk further explained that the device speaks with a voice, or the approximation of one, that corresponds to the identity concepts it recognizes. The Companion was revealed to be female because the universal translator detected this facet of its identity from its brainwave patterns, and assigned it a female voice (TOS: "Metamorphosis"). In the 24th century, UT technology had advanced to where it could be integrated into the combadges worn by Starfleet personnel. The universal translator fails from time to time, as with the Tamarians, whose metaphor-based language defeated the mechanism completely (TNG: "Darmok"). This failure raises the question of whether a universal translator could actually be constructed to handle alien-human communications.


Universal translator in the real world

A device created by researchers at Carnegie Mellon University is a step along the way to a true universal translator. Users simply have to silently mouth a word in their own language for it to be translated and read out in another. Previous translation systems used voice recognition software, which required people to speak out loud and then wait for the translation to be read out. But the Carnegie Mellon system employs electrodes attached to the neck and face to detect the movements that occur as a person silently mouths words and phrases. Using this information, a computer can work out the sounds being formed and then build these sounds up into words. The system is then able to translate the words into another language which is read out by a synthetic voice.

Another gadget reminiscent of the Star Trek device is the Franklin Speaking Global Translator, unveiled at the end of 2006. It contains over 450,000 words and 12,000 phrases, and speaks 115,000 words from 12 languages (Mandarin Chinese, Dutch, English, French, German, Italian, Japanese, Korean, Polish, Portuguese, Russian, and Spanish) in recorded human voice.

SETI scientists have invested a lot of effort into devising messages that could easily be interpreted by any intelligent extraterrestrials who intercepted them. Practical and theoretical work to do with communicating with advanced aliens makes up the field known as CETI (Communication with ExtraTerrestrial Intelligence). It's been widely assumed that science and mathematics would provide universal concepts and constants that intelligent, technological species could use as a basis for talking to one another. SETI researchers tend to assume that advanced ET would decrypt and encrypt their messages using prime numbers, pi, the Planck constant and other presumed cosmic universals so that new members of the Galactic Club could immediately begin deciphering them. However, this assumption has been challenged on the basis of terrestrial experience in deciphering ancient Egyptian and Mayan inscriptions (see lost languages).

On closer examination of the process of decoding these scripts, it's clear that when initial assumptions are wrong, the decryption can be delayed for a long time. These tasks were long held up by Plotinus' fallacy of treating each hieroglyph as an idea or concept in itself without reference to language, and were only accomplished with the aid of such keys as the Rosetta Stone and by studying modern forms of Egyptian and Mayan. The lesson for SETI, it seems, is to remain flexible in the initial interpretations made of messages from other worlds.

The archaeological search for peoples from another time and is somewhat analogous to the search for extraterrestrial intelligence. Without benefit of direct contact with living beings and without the aid of understandable written communications, archaeologists rely on inferences drawn mainly from material traces of past activity.