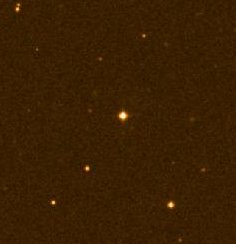 Van Maanen's Star is the nearest white dwarf to the Sun that isn't part of a binary star system (Sirius B and Procyon B are closer) and the second white dwarf to be discovered. It lies in the constellation Pisces, west of Delta Piscium and east of Omega Piscium, and was discovered in 1917 by the Dutch-American astronomer Adriaan van Maanen (1884–1946) who, in comparing photographs made between 1914 and 1917, noticed the star's high annual proper motion of 2.98". Its relative coolness suggests that it is a very old star, perhaps near or older than 10 billion yr. Van Maanen's Star has a computed diameter of about 18,000 km (about one and half times that of the Earth), which results in a density of about 1.2 tons/cm3, or about 10 times the computed density of Sirius B, the closest white dwarf.