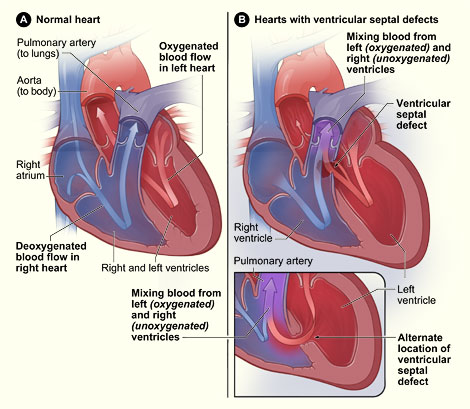 Fig A shows the normal anatomy and blood flow of the interior of the heart. Fig B shows two common locations of ventricular septal defects. The defect allows oxygen-rich blood from the left ventricle to mix with oxygen-poor blood in the right ventricle.

Ventricular septal defect (VSD) is a hole (defect) in the wall that separates the lower chambers of the heart. The lower chambers of the heart are called the ventricles. The wall between them is called the ventricular septum. In the normal heart, the septum prevents blood from flowing directly from one ventricle to the other. In a heart with a VSD, blood can flow directly between the two ventricles.

VSD is a congenital heart defect, which means that it is present at birth. In children with a VSD, blood usually flows through the defect from the left ventricle to the right ventricle. This causes extra blood (called volume overload) in the pulmonary arteries and lungs, and in the left atrium and left ventricle.

Over time, a VSD that does not close – especially a large VSD – can cause:

Doctors classify VSDs based on the:

VSDs range in size from small to large.

VSDs are found in different parts of the septum.

Most VSDs close on their own or are so small that they don't need treatment. Some children and adults need surgery or other procedures to close the VSD, especially if it is large. Most children and adults live long and productive lives after their VSD closes or is repaired.