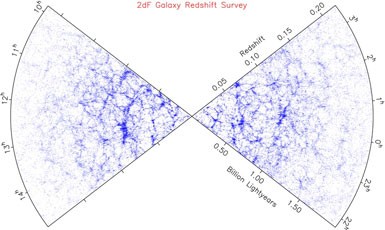 A void is a large region of the universe containing few or no galaxies. The first of these voids was discovered in 1981 in the direction of the constellation Bootes by Robert Kirshner, Augustus Oemler Jr, Paul Schechter and Stephen Shectman in a survey of galactic redshifts. The so-called Bootes Void is roughly spherical and about 250 million light-years (75 megaparsecs) across, or approximately 2% of the diameter of the entire observable universe. Its center lies about 700 million light-years away. Within this cavernous expanse only 53 luminous galaxies have been detected thus far. These lonely outposts of luminous matter are confined to a roughly tube-shaped region of space that passes through the middle of the void.

Voids take up about 98% of the volume of the universe, with galaxies huddled into superclusters that occupy the thin walls that surround the voids. But this doesn't necessarily mean that the voids are virtually empty. On the contrary, it is possible that they contain most of the mass of the universe in the form of dark matter, some os which may be present as dark galaxies.

Voids are the natural result of the way gravity causes matter in the universe to clump together, herding galaxies into clusters and chains, which are separated by regions mostly devoid of galaxies. Understanding the structure and growth of voids could help astronomers learn more about the properties of dark matter and dark energy.

The Milky Way Galaxy itself lies in a large, flat array of galaxies known as the Local Sheet, which bounds a dark region called the Local Void.