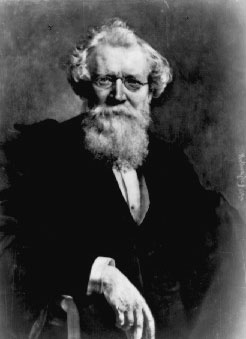 August von Hofmann was a German organic chemist who discovered many new organic compounds. Born in Giessen, he attended the university there, first as a law student. However his interest shifted to chemistry after he attended some of Justus von Liebig's lectures. After obtaining the degree of doctor of philosophy, Hofmann became assistant to Liebig in his laboratory – one of the largest and most influential in the nineteenth century.

In 1845, Hofmann was persuaded to leave his native Germany and organize teaching and research at the newly established Royal College of Chemistry in London. It was partly because of Liebig's example that a group of distinguished men including Prince Albert, consort to Queen Victoria, cooperated to set up a college specializing in chemistry in London. Hofmann's teaching inspired many students who were to be instrumental in establishing the synthetic dyestuffs industry in Britain. Among these students was William Perkin who, in 1856, prepared the first synthetic dye.

Hofmann returned to Germany and synthesized many new dyes, and for some 50 years thereafter Germany had the world's largest dye industry. Hofmann also discovered the Hofmann degradation process, or Hofmann reaction, for converting amides into amines. He also discovered methanal (formaldehyde).