The Perkin reaction is used for preparing unsaturated aromatic acids from the corresponding aromatic aldehyde and the anhydride of the aliphatic acid. The equation for the formation of cinnamic acid from benzaldehyde and acetic anhydride is shown here. 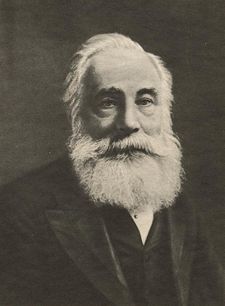 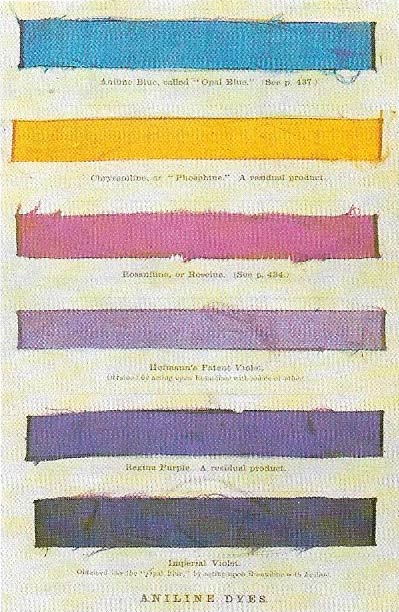 In the middle of the 19th century William Perkin, in his laboratory, carried out research in organic chemistry and in particular into quinine and a substance derived from the coal tar product aniline. By chance this led him to discover a mauve dye. Previously purple colors could be produced only from an expensive natural product. Other aniline dyes followed – some shown from the Popular Science Review (1864).

William Perkin was an English chemist who, in 1856, while studying under August Wilhelm von Hofmann, discovered mauve, the first synthetic dye. Perkin manufactured this and other dyes until 1874, then devoted his remaining years to research. In 1868 he synthesized coumarin, the first synthetic perfume.

Perkin was born in London and was a pupil at the City of London School before he entered the Royal College of Chemistry in 1853 to study under von Hofmann.

A number of important discoveries have been made by accident. Many experiments must have been discarded when they went wrong, but a few apparent failures became the starting point for major advances. It was in such circumstances that the young William Perkin made the first synthetic dye in 1856. At the time he was still a student, but so great was his enthusiasm for chemistry that he had a small laboratory at his home.

One day he set out to make the drug quinine by the action of an oxidizing agent on allyl toluidine, an aromatic compound with an amino group (–NH2) attached to the benzene ring. It is not really surprising that he didn't succeed since it's now known that these two compounds are not related structurally.

Although he failed to synthesize quinine, Perkin did obtain a red-brown precipitate. He was sufficiently interested in this product to repeat the experiment using a simpler aromatic amine. He obtained a black precipitate by the action of potassium dichromate (a powerful oxidizing agent) on aniline sulfate. From the precipitate he separated a small quantity of a mauve substance which he examined further. It had all the properties of a dye and, of even greater importance, it was unaffected by strong sunlight. (At the time almost all dyes were of animal or vegetable origin and no mauve dye was "fast" to sunlight).

Several dyers became interested in his discovery so Perkin set out to make this mauve dye in commercial quantities. He was fortunate in having the assistance of his father and brother in this venture and in June 1857 work started on the erection of a factory at Greenford in Middlesex. While the building operation continued, Perkin was busing scaling up his process.

Thus, at the age of 19 he had laid the foundation of a whole new industry – the coal-tar dye industry, so named because the raw materials are extracted from coal tar. Perkin continued his experiments in search of other dyes and by 1869 had developed the first commercial process for making artificial alizarin. A red dye, alizarin had previously been extracted from the root of the plant Rubia tinctorum.

The dye-making business was so successful that Perkin was able to sell the factory in 1874, so that he could devote all his time to research. As well as synthesizing a number of dyes, he developed a method making unsaturated aromatic acids (i.e., aromatic acids with a double bond in the side chain.) He was also the first person to synthesize the perfume coumarin.

Perkin was awarded both the Royal and the Davy Medals of the Royal Society. Shortly before his death, he was knighted.