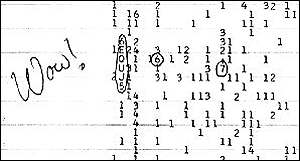 The Wow! signal was an anomalous, narrow-band burst of radio noise picked up on August 15, 1977, during SETI observations by the Big Ear of the Ohio State University Radio Observatory. The signal, which lasted 37 sec and came from the direction of Sagittarius, attracted the attention of Ohio State astronomer Jerry Ehman, who scrawled "Wow!" in the margin of the print-out. It was, said Ehman:

... the strangest signal I had ever seen ... At first, I thought it was an earth signal reflected from space debris, but after I studied it further, I found that couldn't be the case. The signal was near the 21-centimeter line (1,420-megahertz) of hydrogen, where all radio transmissions are prohibited both on and off the Earth by international agreement; it covered only a narrow spread of frequencies unlike the broad-band emission typical of most natural radio sources; and it came from beyond the distance of the Moon. The nearest star in the direction the telescope was pointing is 220 light-years (68 parsecs) away. A source at this distance using a transmitting dish as big as the Arecibo radio telescope (the largest in the world) would require a 2.2 gigawatt transmitter-extraordinarily powerful but not out of the question. Another possibility is that a much weaker signal from a more remote source may have experienced gravitational microlensing by an intervening star. More than 100 subsequent searches of the same region of sky have failed to recover the signal. However, this is not surprising. A telescope such as the Big Ear listens to only about one millionth of the sky at a time and a similar dish on another planet would broadcast to only about one millionth of the sky. The chance of an alignment between receiver and transmitter, therefore, would only be about one in a trillion. On the other hand, it is possible that many such, similarly strong, intermittent and highly directional signals, are arriving at the Earth every day. Although the Wow! signal remains unexplained, Paul Shuch of the SETI League has made the interesting observation that

Either the Wow! signal was the intercepted radiation from another civilization, or it's a previously undiscovered astrophysical phenomenon. Either possibility is mind-boggling.

The Wow! signal is used as a benchmark for calibrating the sensitivity of systems being used in Project Argus. See false alarms, in SETI.