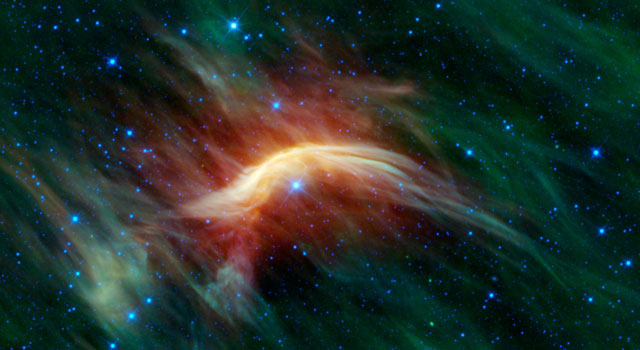 The blue star near the center of this image is Zeta Ophiuchi. When seen in visible light it appears as a relatively dim red star surrounded by other dim stars and (see image below right). Ahead of Zeta Ophiuchi, which is a runaway star racing through space at high speed, is a brilliant bow shock, seen as a yellow arc in this image from NASA's Wide-field Infrared Survey Explorer (WISE). Image credit: NASA/JPL-Caltech/UCLA.

Zeta Ophiuchi is a magnificent blue-white O star that is the third brightest star in the constellation Ophiuchus. Were it not so obscured by clouds of gas and dust (it even illuminates one of them and is well-known for its strong interstellar absorption lines), Zeta Oph would be one of the brightest stars in the sky. It is roughly midway through its 8-million-yr lifetime that will end in a supernova explosion. Like most luminous stars, Zeta Oph is losing mass through a strong wind, blowing at about 1,600 km/s and carrying away about a hundredth of a millionth of a solar mass per year. It also one the sky's most famed runaway stars – stars that used to be together and are now fleeing from a once-common point. Zeta Ophiuchi, speeding through space at more than 85,000 km/h, seems to have been expelled from a binary system in the Scorpius-Centaurus Association when its one-time more-massive companion exploded. The explosions that make supernovae are apparently off-center, so that when one of the stars goes off and is blasted like a bullet to one side, the other one can, if conditions are right, be shot off as well. Zeta Ophiuchi is now single, however, so that the scene cannot repeat itself.

The powerful stellar wind coming from Zeta Ophiuchi compresses the gas and dust in front of the star, creating a curved feature called a bow shock that resembles the shape that water takes in front of a speeding boat (or in this case, as seen in the photo at top, a bird's profile).