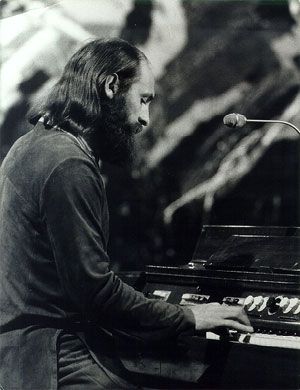 Mike Pinder of the Moody Blues playing a Mellotron.

The Mellotron is one of the iconic instruments of early progressive and psychedelic rock, much used by bands such as the Moody Blues, Yes, King Crimson, and Genesis. The Moodies' Mike Pinder, in particular, played a seminal role in introducing the instrument into recordings and live performances in the late 1960s and '70s.

Unlike the synthesizer, which was also coming into use in contemporary music at this time, the Mellotron is an electromechanical keyboard device which works by playing prerecorded audio tapes when the keys are pressed. Also unlike the early synthesizers it was polyphonic – in other words, capable of playing more than one note at a time. Typically, the sound produced was orchestral, featuring recordings of various stringed, woodwind, and brass instruments. Used in conjunction with the usual guitars, drums, and vocals, the effect was to give the overall band sound great depth, drama, and power.

The Mellotron can trace its origins to a curious instrument, invented by a Russian cellist and physicist Louis Theremin in the 1920s, and named after him (see theremin). Another milestone was the invention of the tone wheel – the sound generator used in the classic Hammond B-3 organ (see Hammond organ).

The invention of AMPEX magnetic tape enabled the recording of sounds that could be stored and played back immediately upon demand, a capability that was exploited in the Chamberlin, first manufactured by Harry Chamberlin in California in about 1952. Musical instruments were recorded on lengths of tape loops sounded for 7 or 8 seconds (a spring mechanism then returned the length to the beginning), and were arranged in keyboard fashion usually with 35 keys. Two or three sounds or voices were recorded on 3/8" or 1/2" tape side-by-side. The selection of sounds was made possible by shifting the tape heads side-to-side. The limited playback time led players to develop a spider-like movement between chord inversions in order to sustain sounds for longer.

In 1962, Chamberlin's agent, Bill Fransen, visited Bradmatic, a small company in Birmingham, England, run by brothers Bill and Les Bradley, which made Spitfire parts and various other items, including playback heads, which is what Fransen was interesting in sourcing. The Bradleys realized they could improve on the Chamberlin and turn it into a commercially viable product – the Mellotron.

The Mellotron Mark I appeared in 1963 but, although it was technically superior to the Chamberlin, it was temperamental. Design improvements led to the Mark II, which was produced from 1964–1967. It was during this era that Mike Pinder entered the Mellotron scene, working at the Bradley's factory for 18 months before going on to form the Moody Blues in whose music the Mellotron would feature so distinctively.