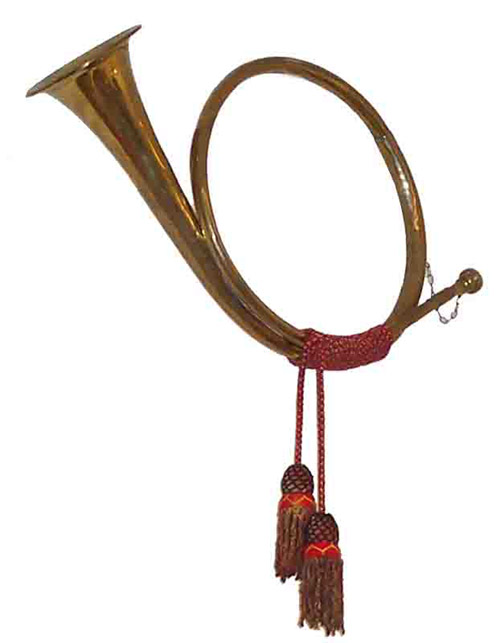 The post horn is a small, valveless brass instrument once used by guards on mail coaches to announce arrivals and departures. Originally bow-shaped, in the seventeenth century post horns were bent in a single loop to play the fundamental pitch bb'. Clearly these were small instruments, perhaps only 7 centimeters (3 inches) across; nevertheless they appear in the music of Georg Philipp Telemann (1681–1767), George Frideric Handel (1685–1759) and Johann Sebastian Bach (1685–1750).

In the eighteenth century, the post horn was extended in length and used by Wolfgang Amadeus Mozart (1756–1791) in a number of works. By the nineteenth century, a variety of crooks and tuning slides were in use and the post horn had become a popular instrument in bands across Europe. In Germany there were even experiments with finger holes, designed to change the fundamental pitch from F to B♭.

In England at the time, the straight post horn was developed that became the standard horn for use on Royal Mail coaches. Keyed in A or A♭, it sounds only up the fifth partial, but was recognizable enough to be used in Koenig's famous Post Horn Gallop. This instrument developed into the coach horn, which was slightly longer, made from copper and had a conical rather than a cylindrical bore. The coach horn was still used by the Royal Mail in the first decades of the twentieth century. There were a remarkable number of tunes composed for so limited an instrument, many of which still survive to this day.