MAKING LIGHT WORK: The Science of Optics - 5. Looking into Eyes

Figure 1. How the eye forms an image. 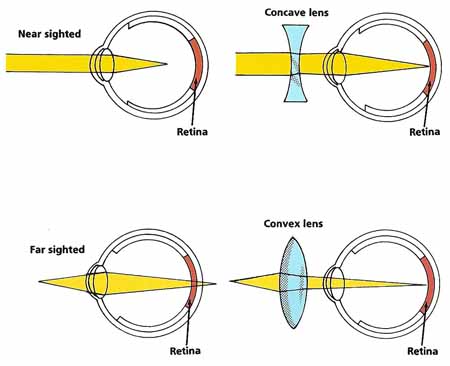 Everyone is born with two very important lenses – the lenses of our eyes. Light enters the eye through a small round opening called the PUPIL. This is the black dot in the middle of your eye. Surrounding the pupil is a circle of muscle known as the IRIS. Colored chemicals in the iris give it various shades of brown, blue, or green. By altering the size of the pupil, the muscles of the iris control the amount of light that passes into the eyeball (see Figure 1).

Just behind the pupil is the lens. It is flexible like rubber, convex in shape, and small – about the size of your little fingernail. Light, falling on the lens, is focused to form an image on a sort of screen at the back of the eye called the RETINA. As you move your eyes from distant to near objects, your lenses are pulled from a thin shape to a fatter one by muscles that are attached to them. In this way, whatever you look at can be brought into focus, even though the distance from the lens to the retina stays the same.

A camera works almost exactly like a human eye. It, too, uses a convex lens to focus images onto a light-sensitive surface.

And, just as the eye has a pupil, so the camera has an opening called an aperture that can be widened or narrowed to regulate the amount of light that passes through.

Incredible though it seems, the images that form on our retinas are upside down. We actually see everything the wrong way up! Fortunately, though, early in life, our brains learn to turn all the images right-side up again to mach what we touch and feel. Newborn babies may see everything upside down, but we do not know this for sure. Experiments have also been carried out on people wearing special glasses that turn the images of things upside down. After a while, the brains of these people learned to cancel out the effects of the glasses so that the world seemed normal again. But when they took the glasses off, everything looked upside down until their brains once more adjusted!

Many people's eyes do not work perfectly. One of the most common problems is when the lens of the eye cannot focus objects clearly on the retina. If the lens is a bit too convex, or highly curved, then it will form images of distant objects that fall in front of the retina. People with this condition are said to be nearsighted because they can see objects clearly only when they are near. The problem is easily solved, however, by wearing glasses with concave lenses. These bend the paths of incoming light rays outward slightly to cancel out the overbending of light by the eye lenses. Their exact shape is prescribed by an eye specialist, or optician, after testing the patient's vision (see Figure 2).

Another common eye disorder is farsightedness. This occurs when a person can see faraway things clearly but not objects nearby. The solution then is to wear glasses with convex lenses.