MAKING LIGHT WORK: The Science of Optics - 6. Over the Rainbow 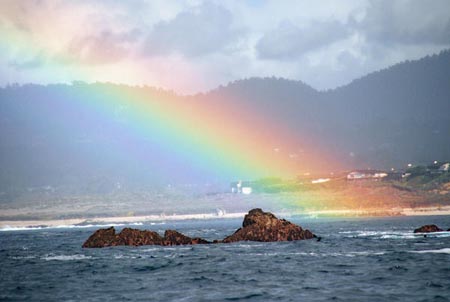 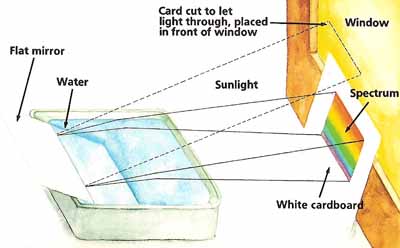 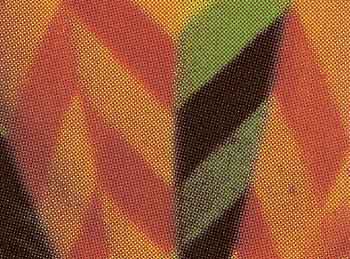 Figure 3. Close-up of a color photo showing the dots of which is composed. 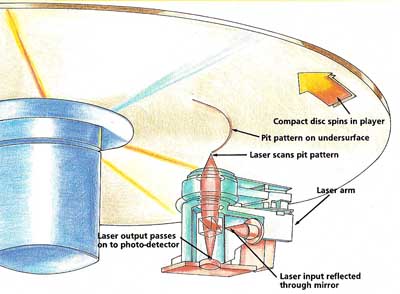 Figure 4. In a compact disk player, light is reflected from the flat part of a disk through a photo-detector.

Our world is filled with color – the green of lush grass, the gray of a heavy mist, the brilliant golds and yellows of sunset. But what is color? How does red light, for instance, differ from violet light? (see Figure 1)

You can think of light as being a kind of wave, similar to waves in the sea. The distance between one wave crest and the next is known as the WAVELENGTH. Different colors of light have different wavelengths. The wavelength of red light is just under one five-thousandth of an inch, while that of violet light is just over one ten-thousandth of an inch. All the other colors fall somewhere in between these two extremes.

The Spectrum of Colors

Sunlight, or the light from an electric light bulb, seems colorless. We call it "white light." But, in fact, it contains the full range, or SPECTRUM, of colors from red, through orange, yellow, green, blue, and indigo, to violet. When these colors pass from air into water or glass, they are slowed down and refracted by different amounts. Red light is bent the least, violet light the most.

Normally, when white light passes back into air, all its colors are bent back by the same amount so that they join together to make white again. However, if the rays are reflected while still inside the water or glass, they leave by different paths from those by which they entered. In this case, the colors are separated and can be seen as a spectrum from red to violet.

The easiest way to produce a spectrum is with a block of glass called a PRISM. This has three flat faces running in one direction and triangular-shaped ends. However, if conditions are right, white light can also be split apart by other arrangements of glass and by water. A rainbow, for example, is caused by reflections and refractions of sunlight inside raindrops.

A FILTER is a material, such as colored cellophane or glass, that only lets light of a particular color pass through. This means that a red object would appear bright when seen through a red filter, but an object of another color would seem dark.

Three of the colors – red, green, and blue – are called PRIMARY COLORS, because they can be combined in different ways to give every other color. A combination of two primary colors gives a SECONDARY COLOR. Green and red give yellow, green and blue give cyan (a light blue), and blue and red give magenta (light purple).

Look through a magnifying glass at one of the color photos in a book. You will see that the picture is made up from a pattern of tiny dots (see Figure 3). Each dot is one of the secondary colors – yellow, cyan, and magenta – or black.

Also look through a magnifying glass at the image on a color television screen. Again, the picture is composed of a pattern of tiny dots (or oblongs). Each of he dots is one of the primary colors – red, green, or blue. By rapidly changing the brightness of the dots, any colored moving sequence can be reproduced on the screen.


Fix the clear piece of cellophane to the flashlight with the rubber band. Set up the flashlight so that it shines onto an opened page of a book, a fixed distance away. Call in your first subject and ask him or her to stand behind a line marked on the floor on the opposite side of the room. The subject should wait about a minute or so that his or her eyes become adjusted to the light level in the room. Then ask the subject to begin slowly moving toward the book until he or she can just read the words. Measure the distance between the book and the subject at this point.

Replace the clear cellophane with a colored piece. Ask the subject to return to the starting point, turn to a fresh page, and again allow a minute to pass. Continue the experiment as before. Repeat it using all of the other colored filters. Record your measurements for each filter. Repeat the entire experiment with several other volunteers. From your results what do you conclude about the sensitivity of the human eye in different colors?

Like all the experiments in this book, this one can be developed further in many ways. For example, you could rearrange it to test how quickly people's eyes recover when exposed to light of different colors. You could do this by shining light of various colors into a subject's eye for a fixed length of time. Then measure how long it is, in each case, before the person can read a book placed some distance away.

Other questions you might investigate: Does eye sensitivity vary with age? Does a person's reaction time depend on the brightness or color of the surrounding light?

The method described for this experiment is intended only as a guide. A number of improvements could be made. For example, an optician's chart showing letters of different standard sizes would probably work better than a book. Several of these charts (which could be carefully handmade) would be needed, since each subject is to be tested with a number of different colored filters.

Another point to consider is whether the different filters let through the same amount of light. This could be checked using a light meter.

The experiment would also benefit by some means of making sure that the subject does not lean forward from his or her standing position to see the chart more clearly. An accurate method of measuring the distance from the subject's eyes to the chart is important since the difference in measurements from one filter to the next may not be great.

This is an experiment that could be improved and developed into a lengthy project suitable, say, for a science fair.

Special lighting effects play a big part in many of today's live rock concerts. The most spectacular of these effects use LASER beams.

Laser light is used, among other tings, in high quality printers (laser printers), optical fiber telephone links, and precision cutting and drilling equipment. Lasers have also found their way into hospitals. They make it possible for surgeons to carry out operations using a needle-thin beam of light instead of a knife. Heat from the laser beam seals off any small cut blood vessels quickly. That reduces the amount of blood lost and allows the operation to be completed in less time.

Compact disk (CD) players use light in the form of tiny laser beam to scan the mirrorlike surface of a compact disk (see Figure 4). To make a compact disk, the sounds from a studio microphone are first changed into numbers. These numbers are then represented on the surface of a compact disk by a series of tiny pits and blanks. In the player, the CD spins around over a laser beam. When the beam hits a blank or flat part of the disk, it is reflected onto a device called a photocell, which then gives out a small electrical current. But when the beam strikes a pit on the disk, it is scattered and no light reaches the photocell. The resulting electrical signals are amplified, or strengthened, and then used to produce sounds from the loudspeakers. Since nothing, except for a beam of light, makes contact with the CD it never wears out and the resulting sound is free of crackles.

Light is a special type of wave called an ELECTROMAGNETIC WAVE. But the spectrum of light, from red to violet, forms only a tiny part of the complete electromagnetic spectrum. Other electromagnetic waves include radio waves, X-rays, ultraviolet rays, and infrared rays. Ultraviolet rays from the sun, for example, cause sunburn on our skin. We feel the sun's infrared rays, on the other hand, as heat.

All of these invisible kind so f electromagnetic waves are identical to ordinary light, except in their wavelength. They each have their own uses – in science, medicine, and everyday life – and each allows us to view the universe in a new and different way.