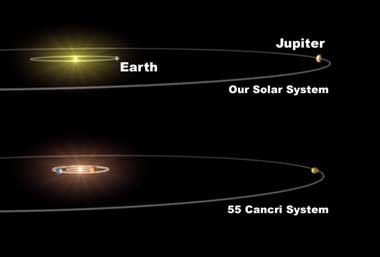 Comparison of the solar system with the 55 Cancri system. Credit: NASA.

55 Cancri is a visual binary star system in the constellation Cancer consisting of a middle-aged, Sun-like primary of high metallicity, 55 Cancri A, and a red dwarf companion, 55 Cancri B. (55 Cancri is the star's Flamsteed designation. Its Bayer designation is Rho1 Cancri.) The component stars are separated by a mean distance of about 1,150 astronomical units (172 billion km, or 108 billion miles). In orbit around the primary have been discovered five planets which, in order of increasing distance are Ae, Ab, Ac, Af, and Ad. This is the largest number of planets currently known to exist around a star other than the Sun.

Ae, the innermost planet, is about 8 times as massive and twice as big as Earth, making it the first super-Earth to be found around a main sequence star. It moves in a tiny orbit that must result in an extremely high surface temperature. At first it was thought that Ae might be a water planet, covered in a deep ocean of supercritical water, but hydrogen was never found in its spectrum. An alternative suggestion, put forward in 2012 is that at least a third of the planet consists of carbon, most of which may be in the form of diamond.

Ab, the second planet, is an epistellar Jovian, or "hot Jupiter," only the fourth exoplanet of all to be discovered. It circles the host star at less than one third the distance of Mercury from the Sun and has a warm, puffy atmosphere which is slowly evaporating into space. The third planet, Ac, is a Saturn-sized world in a highly elliptical orbit that takes it well within intra-Mercurian distance of the star. The fifth planet, Ad, is a high-mass gas giant.

Also surrounding 55 Cancri A is a dust disk, which is presumably a regenerated disk, extending out to about 40 astronomical units from the star with an inclination of about 25°.3, 4, 5

55 Cnc was one of the five targets of the 14 February 2003 "Cosmic Call" initiative (see interstellar radio messages).