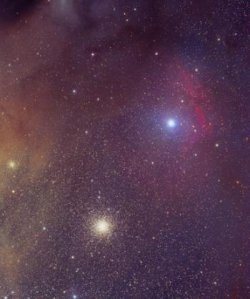 Sigma Scorpii and the globular cluster M4. On the left side of the picture begins the Antares nebula.

Al Niyat (Sigma and Tau Scorpii) are two stars of similar brightness in the constellation Scorpius with the same Arabic name, meaning "artery." They mark the vessels that lead away from the "heart" of the Scorpion, Antares. Sigma Sco is a multiple system (visual magnitude 2.90, absolute magnitude -3.87, distance 735 light-years) dominated by a brilliant spectroscopic binary consisting of an O9 main sequence star and a B2 giant orbiting each other every 33 days at about the distance of Venus from the Sun. Another B star, two magnitudes fainter, lies 0.4" away, while farther out is a ninth magnitude B9 companion. Sigma is believed to be part of the Upper Scorpius portion of the Scorpius-Centaurus Association, though it appears to lie almost 300 light-years from the center of this group. It is also involved with a large mass of interstellar gas, which it ionizes and causes to glow. Unusual among bright naked-eye stars, Sigma's light is reddened and dimmed by over a magnitude by interstellar dust.

The lower of the two artery stars, Tau Sco, is a B0 dwarf (visual magnitude 2.78, absolute magnitude 2.82, distance 430 light-years). It too is a member of the Upper Scorpius Association and was the first star, other than the Sun, to have its spectrum analyzed in detail (by Albrecht Unsöld in 1939). Its measured rotation speed is very low for a B star – less than 5 km/s, compared with a norm for this type of several hundred km/s. Astronomers suspect it may actually be a faster rotator whose spin axis happens to be pointed almost directly at us. It also shows unusual emission lines in its infrared spectrum, leading some researchers to suggest that it may be a Be star seen pole-on.