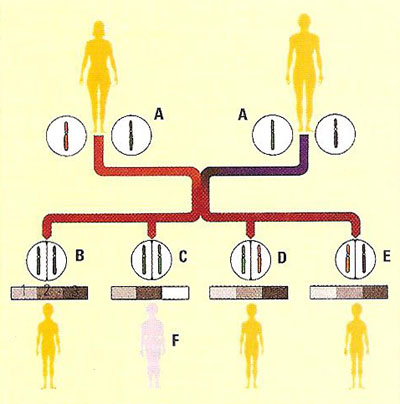 A female and male both carrying a recessive gene (green) for albinism (A) will have three normally pigmented children (B, D, and E) to every one albino (C). The corresponding normal gene (orange or purple) in both produces normal skin color. This is due to an amino acid phenylalanine (1), which has been converted to tyrosine and then to the pigment melanin. However, a recessive gene in double quantity only allows the conversion of phenylalanine to tyrosine (F) resulting in albinism.

An albino is an organism lacking the pigmentation normal to its kind. Depending on the type of albinism, the skin and hair of albino animals (including humans) may be uncolored while the irises of the eyes appear pink. Albinism, which may be total or only partial, is generally inherited. Albino plants contain no chlorophyll and thus, being unable, to perform photosynthesis, rapidly die.

Albinism in humans and other animals occurs when one of several genetic defects makes the body unable to produce or distribute melanin, a natural substance that gives color to the hair, skin, and iris of the eye. The defects may be passed down through families.

There are two main types of albinism:


The most severe form of albinism is called oculocutaneous albinism. People with this type of albinism have white or pink hair, skin, and iris color, as well as vision problems.

Another type of albinism, called ocular albinism type 1 (OA1), affects only the eyes. The person's skin and eye colors are usually in the normal range. However, an eye exam will show that there is no coloring in the retina, at back of the eye.

Hermansky-Pudlak syndrome (HPS) is a form of albinism caused by a single gene. It can occur with a bleeding disorder, as well as with lung and bowel diseases.

Other complex diseases may lead to loss of coloring in only a certain area (localized albinism). These conditions include: