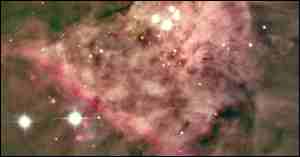 A portion of the Orion Nebula.

The first detection of an amino acid in space was made in 1994 when glycine was found in a star-forming region about one light-year across within the molecular cloud known as Sagittarius B2. This discovery adds weight to the idea that some important prebiotic chemicals, including amino acids, form on grains of cosmic dust and are later deposited on the surface of young planets during impacts with comets and asteroids (see cosmic collisions, biological effects ).

A long-standing puzzle connected with the origin of life on Earth is why all of the amino acids in terrestrial organisms are "left-handed", or levorotatory. One possible answer is that the choice was made, not on the Earth's surface, but long before the Earth and Sun even formed, by the action of ultraviolet light on interstellar molecules. Support for this view came with the 1995 discovery of excess left-handed amino acids in the Murchison meteorite1 and the 1998 discovery of polarized light in a star-forming region of the Orion Nebula. The existence of circular polarized light (in which the plane of polarization continuously changes) in the Orion gas clouds, by James Hough of the University of Hertfordshire and colleagues, using an instrument attached to the Anglo-Australian Telescope,2 is especially significant. Although the observations were made at infrared wavelengths, the team argues that ultraviolet light in the same region, which is obscured by the clouds, should be polarized as well. Ultraviolet light can force chemical reactions to make molecules of mostly one handedness instead of an even split between the two forms. Right-handed ultraviolet light destroys right-handed molecules, leaving an excess of left-handed ones, and vice versa. If the Solar System formed in a similar environment, claims Hough, a 5 to 10% excess in the handedness of molecules – the same as that found in the Murchison meteorite – should result. This might be enough to allow the favored types to gain an upper hand during the early evolution of life on Earth.