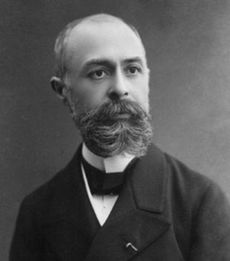 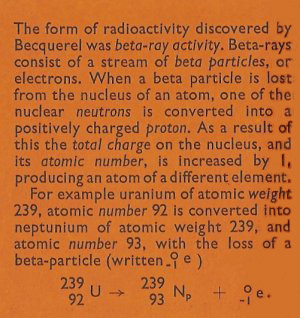 Henri Becquerel was a French physicist who discovered radioactivity. He was born in Paris into a family of great scientists. Both his grandfather and his father were successively professors of physics at the Musée d'Histoire Naturelle in Paris. When it was decided that Henri should also follow a scientific career it could not have been imagined that only a few weeks of his work at the beginning of 1896 would result in the discovery of radioactivity. This revelation, with others, led to a revolution in physics which has had an enormous impact on the world.

In 1878, at the age of 26, Henri Becquerel became an assistant at the Musée, and carried out a lot of experiments in association with his father who by this time had become professor of physics there. It was as a result of some of this work that ten years later Henri received his doctorate degree. Much of his time was spent investigating the absorption of light by crystals, and the effects of magnetism on beams of light and on the phosphorescence of sulfides and compounds of uranium.

By the year 1895 Henri had followed his father as professor of physics at the Musée and was also professor of applied physics at the Conservatoire des Arts et Métiers in Paris. Up to this time he had been known to be an outstanding physicist, but the discovery that was to make him famous was made during the months of Jan and Feb 1896, only.

Becquerel, up till then, had continued his experiments in phosphorescence. In the first days of 1896 he received word that Röntgen had discovered that X-rays excite fluorescence in certain substances. Becquerel immediately decided to see whether phosphorescent substances emitted rays, similar to X-rays, by placing the substances on a photographic plate which was wrapped in black paper, and exposing them to sunlight. Only when using salts of uranium did he obtain fogging of the plate, showing that the radiations came from these salts only. It was then, almost by chance, that Becquerel was led to realize that these radiations were of unknown origin.

Because the weather had become cloudy, Becquerel put all his material into a drawer and awaited a sunny day. As a check, he then developed the photographic plate and found that the fogging had again occurred, even though the uranium salt could not have phosphoresced since it had been in darkness for some days.

To see whether the effect depended on the uranium salts having previously been exposed to sunlight at all, Becquerel next prepared the salts in darkness. He also performed the experiment in darkness, but found the same result – the fogging of the photographic plate did not depend on phosphorescence.

After further work, and by noting that his newly discovered rays could pass through metal plates and still fog the photographic plate, though less intensely, Becquerel found that all salts of uranium, and the metal uranium itself, continuously give off invisible rays. he had discovered that uranium is radioactive.

It is now known that Becquerel discovered one type of radioactivity – beta particles (beta-ray activity), which is due to high-speed electrons leaving the nucleus of the atom – in this case, the uranium atom.

Within a period of about six weeks Becquerel had enough evidence to announce his discovery of spontaneous (or natural) radioactivity to the Academy of Sciences in Paris. This he did in February 1896.

Nowadays it is generally considered that Becquerel discovered radioactivity by chance, but it is truer to say that he was looking for an effect so similar to radioactivity that he must have discovered it sooner or later, and he was so great a scientist that he quickly realized the importance of his evidence.

Becquerel, after further important work in radioactivity, died in 1908 at Croissic in Brittany, but will be remembered – in the words of his Nobel Prize award in 1903 – "for the discovery of spontaneous radioactivity."