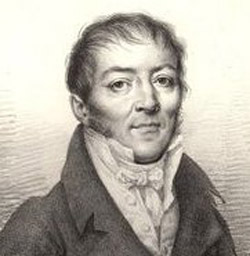 Alexis Bouvard was a French astronomer and mathematician, who was born in a hut in Chamonix and grew up a shepherd boy. He went to Paris, taught himself mathematics, and was appointed assistant to Pierre Laplace. He discovered several comets and drew up tables of the planets, which led him to notice that Uranus moved in a way that couldn't be completely explained as a result of the gravitational pulls of the then-known planets. Bouvard left it to his successors, however, to decide if the mystery were due to inaccurate observations or to a genuine eighth planet. See also John Adams and Urbain Leverrier.