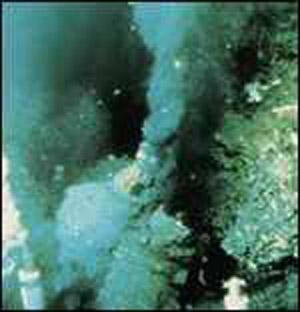 A black smoker is a chimney-like structure above a marine hydrothermal vent (an underwater geyser) at the crest of an oceanic ridge, which produces a dense plume of hot, black, fine-grained, precipitates. Black smoker chimneys are generally made from sulfides of iron, copper, and zinc. The sulfides are precipitated when the very hot mineral-rich waters erupting from below mix with the cold water of the ocean. It is the precipitates that make the vent water appear black in color and give the chimneys their name.

Black smokers were first discovered in the late 1970s. The warm, chemical-rich environments around them have been found to be home to hundreds of new species, including previously unknown types of giant clams, crabs, and pink brotulid fish. One type of organism, a reddish worm known as vestimentiferan, which builds and lives in a tube up to 7.5 m (25 ft) long, is so different from any other known animal that it has been classified in a phylum of its own. At the base of the food chain are chemoautrophic archaea that use chemical energy derived from the breakdown of hydrogen sulfide to build organic compounds.

In May 2000, Australian scientists retrieved a 2.7-m-long, gold-laced black smoker from the floor of the Bismark Sea, at a depth of 2 km, off Papua New Guinea. It was caught accidentally in the dredge frame of the Research Vessel Franklin, which was being operated by Australia's Commonwealth Scientific and Industrial Research Organisation (CSIRO).